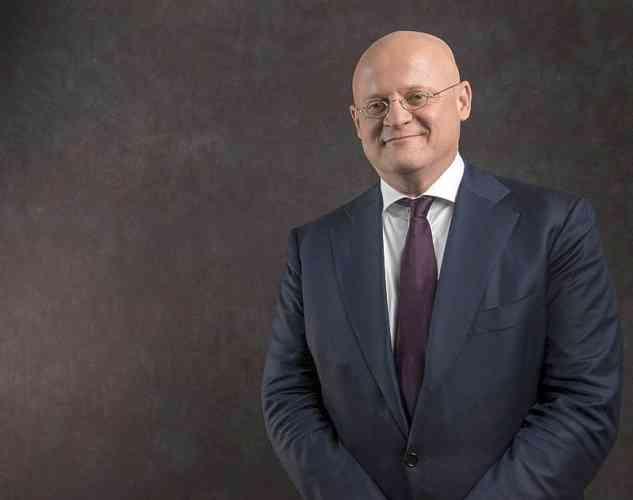 THE HAGUE–Since 2010, the circumstances under which the Caribbean Netherlands Police Force KPCN has to work have changed: the population on the islands has grown, more tourists are visiting and violence/crime has increased.

Dutch Minister of Justice and Security Ferd Grapperhaus stated this in a letter that he sent to the Second Chamber of the Dutch Parliament earlier this week in which he provided an update on the KPCN, the Police Force of Bonaire, St. Eustatius and Saba.

Since the three islands became Dutch public entities in October 2010 and the KPCN was established, there have been many investments in various parts of the Police Force. The focus in the first years was on recruiting new personnel, training existing personnel and acquiring material.

In his letter, Grapperhaus referred to a report that KPCN management drafted regarding the reshaping of the police organisation, which the minister expects to implement later this year following different consultations. “With this plan, we move forward with further professionalising the organisation and making it future-proof.”

Adapting the current organisational plan with both a quality and quantity impulse for the KPCN is needed, stated Grapperhaus. This is necessary because the context within which the KPCN works has changed. On average the population, mostly in Bonaire, has grown by 20 per cent, the number of visitors has increased and so has the level of violence and crime. Also, the number of young offenders has grown.

“This means that the workload of the KPCN has not only increased, but it has also become more complex. With the current capacity, there is insufficient room for training and development,” stated the minister.

Expanding the basic police care is necessary due to the increased workload. The intention is to make capacity available to respond to heavy crime. The quality and quantity will be increased by adding locally stationed Kingdom Detective Cooperation Team RST detectives to the KPCN in the near future. Grapperhaus also announced that the KPCN management team would be reduced from six persons to three, who would focus on the strategic tasks of the Police Force.

The KPCN is an independent Police Force, be it limited in size. The capacity and material of the KPCN is geared towards carrying out basic police tasks, with limited specialties. “This Police Force cannot be completely self-sufficient,” Grapperhaus stated, adding that this is one of the reasons for working closely together with other Dutch Caribbean Police Forces and law enforcement agencies.

“Only through a solid regional cooperation with Police Forces of the countries Aruba, Curaçao and St. Maarten, the Caribbean parts of the Coast Guard and the Royal Marechaussee, and in particular in close cooperation with the Dutch National Police, is it possible to fill the voids in police care in the Caribbean Netherlands as much as possible.”

Certain scarce specialties are borrowed from the other police forces within the Kingdom. The geographical positions of Bonaire, St. Eustatius and Saba and the fact that Bonaire and the two Windward Islands are some 800 kilometres apart also requires attention of the police organisation.

“An important point of departure is that the Police on St. Eustatius and Saba, in principle, can function on its own for 48 hours in case of incidents.” For this reason, it is preferable that all-rounders work on the latter two islands.

The starting salary of KPCN personnel is lower than the Curaçao Police Force KPC (16 per cent), the St. Maarten Police Force KPSM (33 per cent) and the National Police (34 per cent). The minister noted that these differences were not entirely conclusive as the percentages didn’t include other aspects that are of influence such as health care insurance, pension arrangement, taxes and cost-of-living allowance.

Grapperhaus explained that especially the officers who were hired after 2014 are confronted with a lower starting salary, in contrast to their colleagues who started before 2014, who are covered by an extensive guarantee regulation which safeguards their salaries throughout their career at the KPCN.

The minister said that unfortunately, this was the unavoidable effect of the harmonisation process. He did state that within the salary agreements, he had sought room for further improvements. As such, new officers start four wage levels higher and they maintain that benefit with their subsequent promotions after completion of their training.

D-Boat drifts away in Simpson Bay due to bad weather. |... 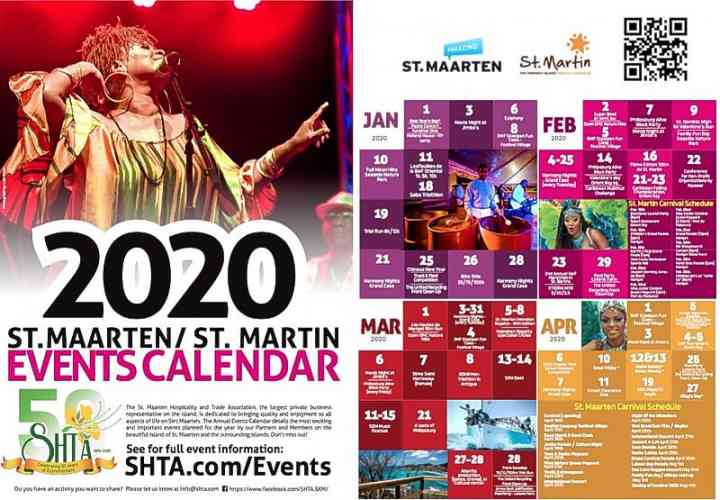 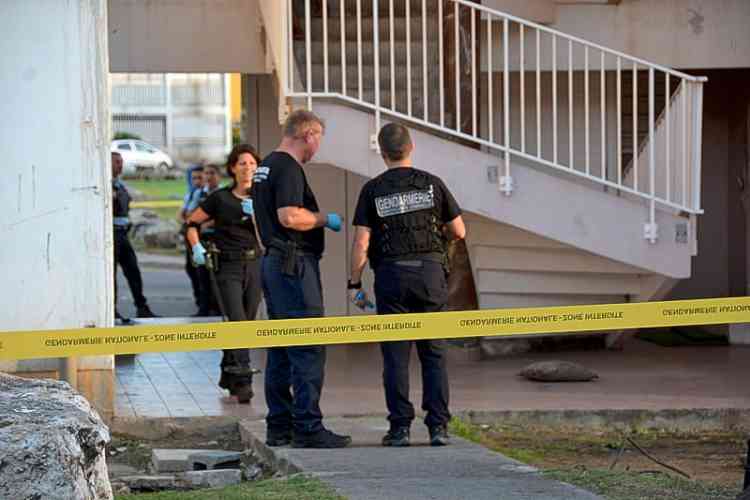 January 13, 2020
0
Gendarmes investigating a shooting in French Quarter on Sunday afternoon, where a 16-year-old boy was shot and killed.   FRENCH QUARTER--A sixteen-year-old boy was killed in... 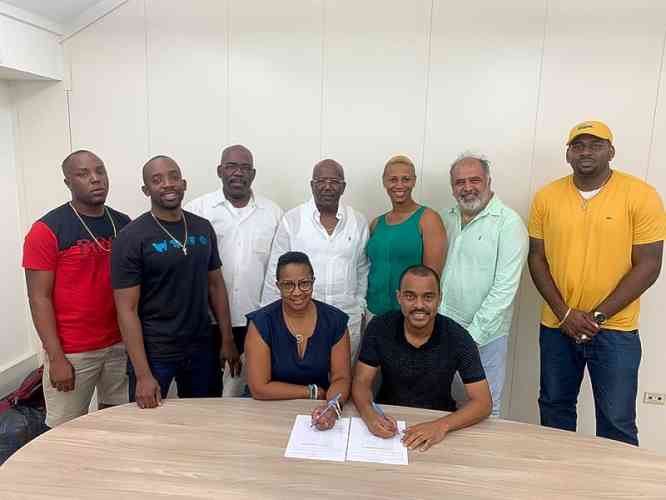 January 13, 2020
0
NA and UP representatives signing the agreement on Saturday evening.   ~ Emmanuel mum on reasons for not signing ~   PHILIPSBURG--Prime Minister and National Alliance leader...

January 13, 2020
0
NA and UP representatives signing the agreement on Saturday evening.   ~ Emmanuel mum on reasons for not signing ~   PHILIPSBURG--Prime Minister and National Alliance leader...

January 13, 2020
0
A view of a damaged church after the earthquake in Guayanilla, Puerto Rico.   PHILIPSBURG--St. Maarten National Disaster Coordinator and Fire Chief Clive Richardson said in... 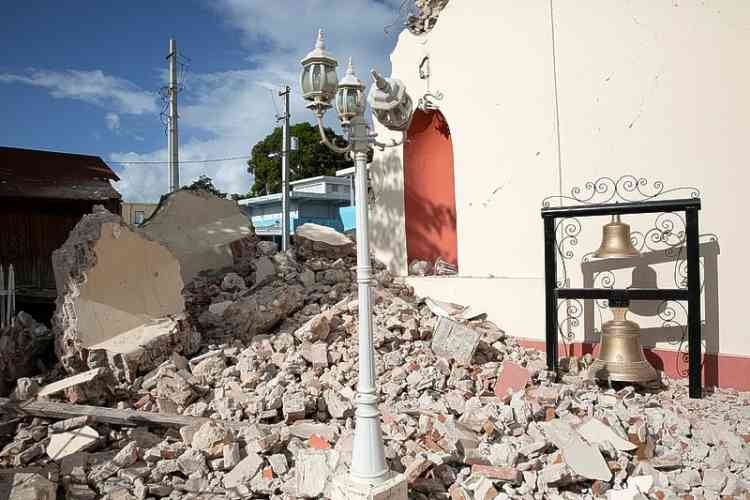 January 13, 2020
0
A view of a damaged church after the earthquake in Guayanilla, Puerto Rico.   PHILIPSBURG--St. Maarten National Disaster Coordinator and Fire Chief Clive Richardson said in...

Brooks-Salmon departs world after fierce battle with cancer | THE DAILY...

NA, UP sign coalition agreement, NA’s Emmanuel has not signed |...

Holiday starts consultations on formation of Government | THE DAILY HERALD

Sarah says UD open to talks to form next Govt. |...

IPKO ends, no agreement on election observation | THE DAILY HERALD

Minister Arie Slob to meet with Caribbean Netherlands’ educators | THE...