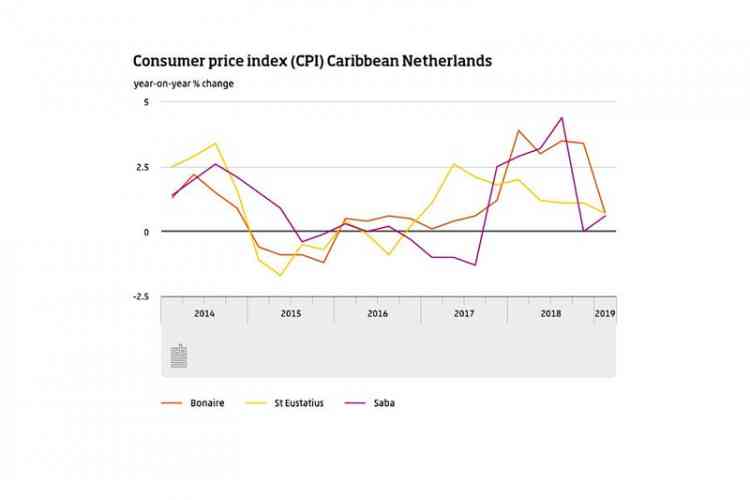 This graph tells the story.

BONAIRE–During the first quarter consumer prices in Bonaire were 0.7 per cent higher than the same period in 2018. The year-on-year increase had still been 3.4 per cent for the previous three months. Prices also rose on St. Eustatius and Saba, by 0.7 and 0.6 per cent respectively.

This was reported by The Central Bureau for Statistics (CBS) of the Netherlands, based on the consumer price index (CPI).

In Bonaire, CPI-based inflation was tempered by the price development of electricity, which was on average 10.5 per cent cheaper than in the previous year. In addition, petrol was down in price, and average price levels of clothing and footwear declined year-on-year as well.

On the other hand, drinking water rose in price by nearly 44 per cent over a period of 12 months. As of April 1, 2018, maximum rates were introduced by the Dutch Authority for Consumers and Markets (ACM). These were raised as of January 2019.

During the first quarter consumer prices on St. Eustatius were 0.7 per cent up year-on-year, while this had been 1.1 per cent in the previous quarter. The increase was slowed down by price developments of clothing and drinking water. Drinking water was almost four per cent cheaper than a year ago.

The price development of electricity had an upward effect. Electricity rates were reduced as of January 2019, but still turned out to be over four per cent more expensive than in the first three months of 2018.

Prices of goods and services on Saba were up in the first quarter on average by 0.6 per cent but remaining at the same level of the previous quarter. Fresh fruit and vegetables increased in price.

Petrol and airfares also had an upward effect on consumer prices. Fuel, for example, was almost 14 per cent more expensive year-on-year, while airfares went up by more than five per cent on average.

As of 1 July 2017, ACM set maximum distribution rates for electricity in Saba and St. Eustatius. On both islands this had different consequences for consumers. On Statia, electricity prices dropped by nine per cent over the past five years while on Saba they increased by 8.9 per cent.

On Bonaire, ACM introduced maximum rates as of April 1, 2018. Since the beginning of that year the price of electricity has fluctuated substantially. Over the past half a decade electricity has become 10.3 per cent cheaper for consumers on the island.