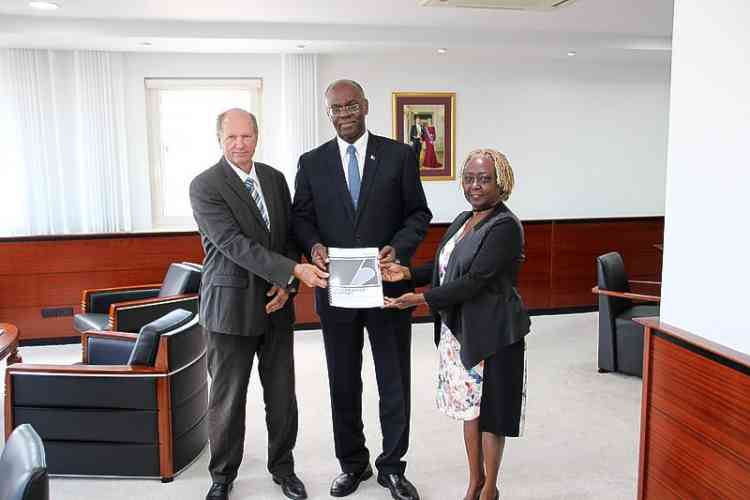 However, the informateurs noted that having such broad support does not guarantee a stable government for four years. They also indicated that while these options are the most viable, parties have indicated that “differences in personalities,” “trust” and “animosity” are the real stumbling blocks in providing the country with a stable government. Party programmes and priorities are not bottlenecks in forming a coalition.

It should be noted that any formation that includes SMCP will only be possible under the condition that US Party is not part of the coalition. The informateurs said, “This is a matter of principle brought forward by the SMCP” and all other parties are, in general, open to work with any party and do not exclude the involvement of US party.
These comments were included in the report entitled “More than the numbers” that the informateurs presented to Governor Eugene Holiday. A copy of the report was provided to the media on Tuesday.

In the conclusion of their report, the informateurs said they recognise that although the numbers in a formation of United Democrats, NA and US, or United Democrats, NA and SMCP, provide a broader support to Government, personalities, trust and animosity as mentioned by the two largest parties play an important role in promoting stability in government.

“Considering the human factor, there are real challenges for stability to be maintained for four years. However, the effects of a breakup by one of the two major parties in a coalition involving a smaller party will have less impact,” the informateurs stated in their report.
“Through the drafting, signing and committing to a well-prepared comprehensive governing programme, continuity of the governing programme in essence should be secured in whatever coalition that might remain or might be formed by one of these parties, if a split in the support of the government occurs.”

In a formation of government consisting of United Democrats, NA and US Party, or United Democrats, NA and SMCP, the major players – the Members of Parliament-elect (MPs-elect) – are committed to the governing programme, which should secure the continuity of its execution in whatever new coalition supporting government is formed.
“A new governing programme deviating from the one all parties and MPs [in these coalitions – Ed.] committed to, ideally should not be a matter for discussion.”
The informateurs were assigned the task of exploring the possibilities of the formation of a new cabinet that can count on the broadest possible support in the Parliament for the execution of required policies.

The informateurs concluded that formations including United Democrats, NA and US Party, or United Democrats, NA and SMCP, would provide alternatives for a broad support in Parliament to guarantee a stable government.
According to their report, the manifestos, priorities and commitment for stability with a vision for the coming four years (and beyond), as expressed by the parties, do not have major differences. “However, much work remains to be done with regard to a governing programme, as no steps of approach on the execution of the priority areas are outlined in the manifestos and programmes. All parties have in principle subscribed to the areas for which the Governor requested special attention.”

Sustainable reconstruction of St. Maarten with priority for the critical infrastructure, tourist sector, social infrastructure, law enforcement and public finances is high on the agendas of all parties for the coming four years, with minor differences.
All parties also expressed willingness to cooperate with the Netherlands, more specifically with the agreements made with the Netherlands and the World Bank in connection with the reconstruction funds. However, all parties emphasised the condition that the St. Maarten Government should manage the reconstruction and be dealt with fairly. NA explicitly indicated that the party does not have any problem with the Netherlands. However, it indicated that communication and mutual respect are required.

All parties also spoke of the need to strengthen the relationship with the Netherlands and indicated that preparing St. Maarten for the upcoming hurricane season is a matter of great concern. Each party offered suggestions to contribute to hurricane preparedness.
“Conscious that these matters are not new on the agendas, finding a sustainable and durable solution for the landfill and the waste-processing problem has the full attention of all parties. The eminent environmental and health hazard are underscored, as well as the negative impact these situations have on the economy. A thorough outline of plans for possible solutions for the problems was presented by the NA, US and SMCP,” the report read.

“Attention to both physical infrastructure and human capital is required. The stakeholders recognise that the development of one sector without the other is not conducive to stability and progress. Business cannot operate and survive without customers. The hotel industry cannot get back on track and flourish without the necessary infrastructure, tourists and other services and activities to support the industry. The citizens need to have jobs to maintain their purchasing power,” the report stated.

In the meantime, the informateurs indicated that the main issues to be explored by the still-to-be-appointed formateur would possibly be which direction is most viable in the general interest of the country and the people of St. Maarten to guarantee both stability and continuity in government, and whether the parties that can possibly provide a broad support for the upcoming governing term can find common ground to agree on a governing programme despite the human factor.