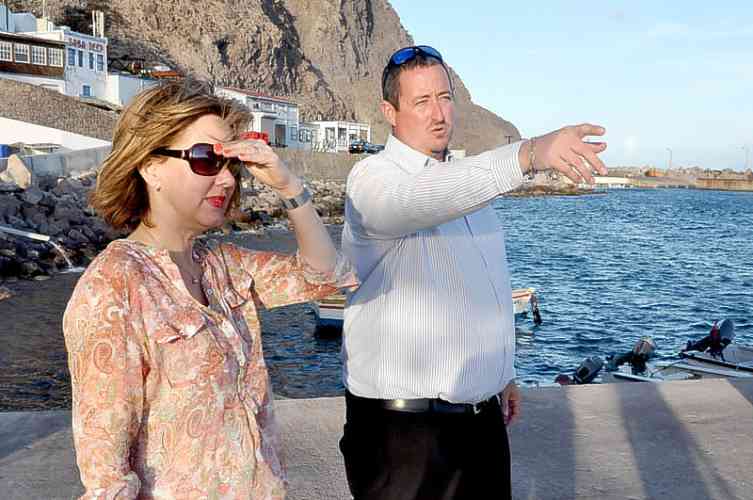 The project to upgrade and expand Fort Bay Harbour, the project to build a water pipe and associated logistics from Fort Bay to Hell’s Gate, the renovation and expansion of Juancho Yrausquin Airport, the construction of the water bottling plant near St. John’s; the Ministry of I&W is investing a lot in Saba’s development.

This was Van Nieuwenhuizen’s first visit to Saba, and she very much liked what she saw. “This is a very beautiful island, and I was especially impressed with how steep it is. You only realise this when you see it with your own eyes. At the same time, I realised how complex it is to build on Saba. It is quite a challenge logistically.” In this sense, she also mentioned the challenge of erosion.

Van Nieuwenhuizen further mentioned the project to improve the water supply and distribution, and the project to expand and upgrade the harbour, which she referred to as “crucial for the island’s future.”

She said it was very important to construct a strong and safe harbour for the handling of cargo and people. “It concerns a very large project involving a big budget which is highly important for Saba’s development. This needs to be done right.”

She was very positive about the meetings she had with the Executive and Island Councils. About the meeting with Island Councilmembers Eviton Heyliger, Vito Charles and Hemmie van Xanten on Tuesday morning, she said, “We had an open, pleasant talk during which the members brought up various subjects.”

The relation with the Saba Government is good, Van Nieuwenhuizen stated. “We have a very good cooperation with appreciation from both sides.”

The Ministry of I&W will remain involved. “Having good agreements inspires everyone to continue.”

She complimented Saba and its government for their hard work and commitment.

The minister landed on Saba Monday afternoon following an aerial tour of the island with charter company SXM Airways. On her arrival, Commissioner Bruce Zagers gave her an update on the airport project, which he said brought much convenience for all users.

The delegation, which included several top civil servants of the ministry, stopped at the Under the Hill social housing project on the way to The Bottom.

Harbour project manager Ton van der Plas updated the minister via a presentation. The harbour, built in the 1970s with the addition of the small pier in the ’90s, is currently only able to provide basic services: roll-on roll-off for cargo, the off-loading of fishing boats, and the off- and on-loading of ferries and dive boats.

The current harbour is also very exposed. Extending the main pier would reduce wave exposure. “The conditions are now far from ideal,” Zagers told the minister during a visit to the harbour after the presentation.

The close to 30-million-euros project, financed by the Dutch Government, involves the construction of a new, larger pier farther West from the location of the current small pier, the extension of the current main pier and improvements at the shoreline and on-land infrastructure. It will be by far the biggest project for Saba ever, money and size-wise. The project is in full preparation and the intention is to appoint a contractor by the end of this year. It will concern a design-and-build contract. Construction will start in 2020.

After the visit to the harbour, the delegation went to the landfill where Zagers explained the workings of the recycling facility and the waste burner.

The minister and her delegation met with members of the Island Council and Commissioner Rolando Wilson on Tuesday morning before proceeding to the airport for the flight to St. Eustatius.