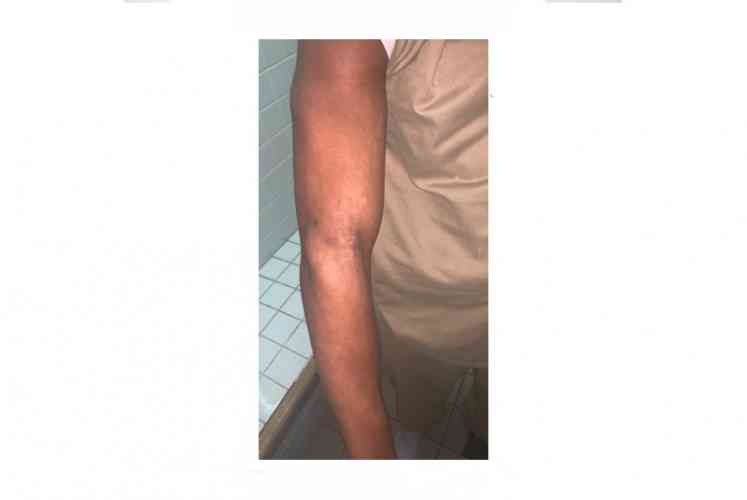 An inmate of Pointe Blanche prison showing a rash on his arm allegedly caused by contaminated water.

POINTE BLANCHE–All inmates with jobs inside Pointe Blanche prison are continuing the strike they started Wednesday. Nobody is doing work, such as kitchen work or the distribution of food, until their demands are met. The inmates want human-rights violations to stop and seek improvement to the “inhuman” conditions under which they are being held.

Representatives of the striking inmates met with prison director Alvin Queely on Wednesday and were informed that they are “not a priority,” according to a source close to the inmates.

The prison director said he is preparing for a meeting with the European Committee for the Prevention of Torture and Inhuman or Degrading Treatment or Punishment CTP, which will be taking place next week.

On more than one occasion, the CPT has given recommendations to alleviate the human-rights violations in the prison and in the Philipsburg police station.

A spokesperson for the inmates said under the condition of anonymity that the prisoners were “shocked” by the director’s reaction: “They are living under the prison roof and for the director to state that they are not a priority was not what they expected.”

The inmates informed the director that the prison is full, as the maximum capacity of 70 inmates, which was set by the Prosecutor’s Office after Hurricane Irma in late 2017, was reached. However, the prison director informed them that he could take the number of inmates in Pointe Blanche up to 86, if he wanted.

The inmates are left to wonder what is about to happen with them. They did not get a new meeting date from the director, which leaves them in the dark, while they are surrounded by cockroaches and pigeons. They cannot and will not take this anymore, and, therefore, the strike continues, the spokesperson said.

Caretaker Minister of Justice Perry Geerlings said he had been informed about the inmates’ meeting with the prison director and would be updated on the progress of those talks.

“I believe my previous colleague [former Minister of Justice Cornelius de Weever – Ed.] informed the general public about the upgrades of the police cells. I believe those are completed. I stand to be corrected if, all of a sudden, there is a new situation. As a matter of fact, I received pictures from the police cells and they look quite fine right now,” Geerlings said Wednesday during the Council of Ministers’ press briefing.

“At Pointe Blanche [prison], with the containers, it was rumoured that that project was put on hold. Again, false information being shared with the public in general.

“We have the containers at our disposal, but in order to make them available to hold prisoners you need to make sure you position them correctly on the property of the Pointe Blanche prison facility and we have to still make sure there is running water, electricity available, protection against heat from the sun; so that is being worked on by [Independent Consulting Engineers] ICE,” Geerlings said.

“You need the architectural planning, you need the civil works planning, and that is what is being worked on right now. So, as soon as that is ready, then we know exactly where and how [the containers] will be placed. So, there is no such thing that this project was put on hold. We just need to do things the way they are supposed to be. You can’t just barge in there with a container, you put it in there and you put inmates in it. Everything takes planning.”