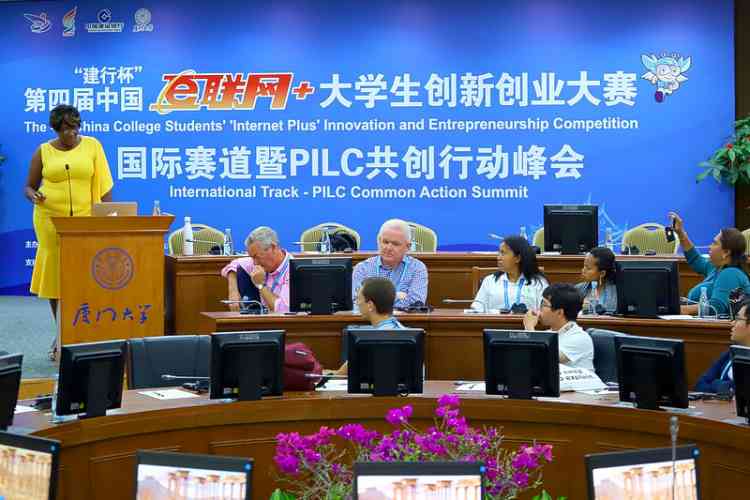 XIAMEN, China–Marco Filippi from Italy, the developer of “Wego,” an innovative car-sharing app, was in China this week to pitch his idea in the hopes of gaining momentum in the world’s most populated country. His aim was to attract investors who see the same economically-viable and eco-friendly solution as he does.

Filippi’s pitch was one of 60 from around the globe, including St. Maarten, at the Fourth China College Students’ “Internet Plus” Innovation and Entrepreneurship Competition held at University of Xiamen in Southern China. He did not win the competition, but sees it as a steppingstone.

“China is the biggest market for us,” said Filippi. “It was very useful to be here even without having the winning pitch.”

It has been useful for Filippi’s “Wego,” as it put out to a wider audience his business model of people “timesharing” cars rather than investing in one of their own. This model offers built-in secondary insurance specific to the car-sharing market.

The gathering of innovators and entrepreneurs in one venue created a hub for different platforms and networking. “It was good for my business and my personal development,” Filippi said.

From an eco-friendly option to more country-specific, Tunukiwa Daudi of Kijana Voice Network, a Tanzania-based media company, hoped to attract an investor or get drafted into a business incubator. His goal was to garner at least enough money to expand his studio to produce more content to boost entrepreneurial thinking and lifestyle skills among the youth.

“We are transforming mindset and influencing culture,” Daudi said.

The radio and television programmes his company created several years ago need to be placed now in an accessible format. “We need a media hub and for that we need equipment,” Daudi said.

He too was not successful in finding a backer at the competition, but sees it as a major steppingstone and is immensely happy with the exposure and networking opportunities.

Two young women journeyed from Madagascar to see if their eco-friendly business would get funding to help them meet growing demand for sustainable charcoal production. Fetra Amdriafaramalala and Lalanirina Rasoloarimanga’s Mi-Arina project turns solid organic waste into charcoal – a fuel heavily in demand on this island.

“We were only seeking US $50,000 to expand our business to meet a growing demand. We are taking what is waste and turning it into something useful and needed for our people,” Amdriafaramalala said. “Our product has an application in the wider world, so we still have hope of gaining some investment with the exposure we now have from this competition.”

Project Mi-Arina was also not successful in gaining an immediate investor.

Invitly, a business social networking app created by a French and Dutch duo, was also among those wooing investors. The already-operational app of co-founders Karim Benaïssa and Alexander Bregman allows users to create casual meetings for networking or information gathering.

Competition judge Simon Jones of the United Kingdom said that aside from the innovative ideas, it was “the passion” of the competitors that stood out, as well as their “spirit of creativity.”

“There was an enormous amount of energy and they were all open to collaboration,” Jones said.

He described the competition as an integral part of the creation process.

“We can all communicate via the Internet and social media, but events such as this make it all human. It was also good to not only see innovations surrounding the buzz words of Blockchain and AI [artificial intelligence – Ed.]. Competitors were all seeking to address the needs of nations,” said Jones.

China’s investment in innovation and commitment to entrepreneurs was heavily illustrated at the summit. The international competition track formed part of the Common Action Summit organised by the China-based Promotion Association for the Global Youth Innovation Leaders Community PLIC.

Running parallel to the international track competition, was the local one that pitted hundreds of college students from around China against each other. They put forward their innovative takes and entrepreneurship ideas to a host of judges. Participation in this competition has led to real life applications. Case in point is one of China’s biggest bike-sharing businesses and apps which has its roots in this competition.