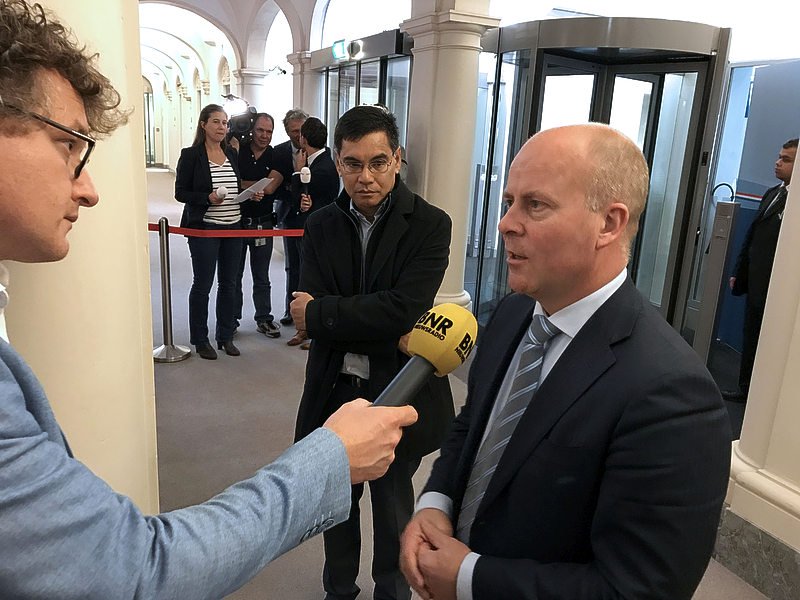 THE HAGUE–The people of St. Maarten will have to wait a bit longer on the Recovery Fund. The unstable political situation with only a small majority in Parliament supporting the Dutch conditions and the lame-duck, insecure status of the St. Maarten Government complicate issues.

“We are faced with a political situation that is very complex, one that I didn’t cause, and that is what we have to act on,” Dutch State Secretary of Kingdom Relations Raymond Knops told reporters after Friday’s Council of Ministers meeting, in which St. Maarten and the Recovery Fund to help rebuild St. Maarten after Hurricane Irma were discussed.
The Netherlands wants the reconstruction funds to be spent well, under strict supervision, and the division in the St. Maarten Parliament about the Dutch conditions doesn’t contribute to clarity, the State Secretary implied. “We now have a caretaker government, and possibly there will be elections. It is not very clear which way things are going. The majority of today is not an assurance for the future. Things can suddenly go a different way.”
Knops didn’t want to anticipate the next move and said he would first speak with St. Maarten Governor Eugene Holiday on Friday afternoon to get an update on the situation and the possible different political scenarios. “How does he think that things will proceed in the coming weeks and months? After that we can determine our position.”
More clarity is needed on the status of the St. Maarten Government in the coming days – whether it maintains a caretaker status until the January elections, or it becomes an interim government or a new cabinet. Whatever the format of government, it will have to fully concede to the Dutch conditions of establishing an Integrity Chamber and strengthening the border control with the Dutch Royal Marechaussee and Customs.
Knops said there had never been a demand that all 15 Members of the St. Maarten Parliament sign the agreement, as was hinted at during Thursday’s meeting of the St. Maarten Parliament. The Hague does want the signatures of the members of the St. Maarten Government. The latter is the partner that the Dutch Government has to do business with, not the St. Maarten Parliament.
Asked by the media if he was “glad” that Prime Minister William Marlin had been sent home by Parliament, Knops said it didn’t matter whether he was happy or not. “I am happy with the fact that the majority of Parliament approved the motion which clearly indicated that they are in full agreement with the conditions. That is in everybody’s interest, because the funds need to be spent in a proper manner.”
At the same time, the State Secretary said he concluded that there was a political crisis – an adopted motion of no-confidence that has resulted in the resignation of the government which now has a caretaker status. “It is not clear how things will proceed from here. Fact is that there is a resigned government. For us it is important that we can do business with a functional government and that the conditions are actually accomplished.”
As for the calling of elections, Knops said that this was not up to him to indicate what he wanted. “But what I don’t want is a further delay before we can start with the much-needed reconstruction. There is a lot to be done. We all want the reconstruction to start, but we can only do so after it is clear that the government and Parliament will keep supporting.”
The State Secretary called the majority of eight in the Parliament “extremely small” in a situation that he termed as “fragile.” Knops didn’t want to anticipate what would happen if elections were called and what the actions of the Kingdom Council of Government would be. He said that in the meantime he would not remain idle.
As for the risk of a severe delay in the establishing of the Reconstruction Fund due to the insecure political situation, Knops said that it was his goal to get moving as soon as the Dutch Government had received full cooperation from Philipsburg. “It also depends on the caretaker government.” The fund will be discussed in subsequent meetings of the Dutch Council of Ministers. Establishing an intermediate fund is one of the options.
Knops said it would take at least another two weeks before he could visit St. Maarten. That is because he has to be in the Second Chamber of the Dutch Parliament for the handling of the draft 2018 budget of Kingdom Relations next week Tuesday and Wednesday, and the handling of the draft 2018 budget of Home Affairs one week later.