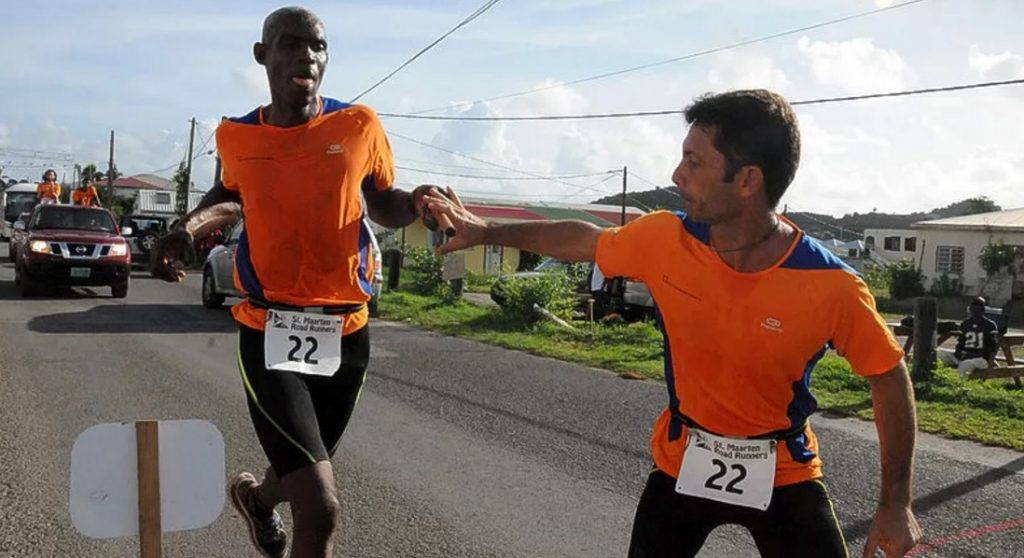 CAY HILL–Insel Air Roadtest Team from Curacao won the Road Runners’ 29th Around the Island Relay Race and set a course record.  The Insel Air team won the 28th addition of the 10-leg relay last year with a time of 1:55:28. The course record had been set in 2010 by the Coors Light Under Armour team that finished with a time of 1-hour 59-minutes.

However the Roadrunners won the 26th annual Around the Island Relay Race in 1-hour, 54-minutes 19-seconds.  The record was questioned as previous races had started and finished inside Raoul Illidge Sports Complex. Runners would enter the stadium and race three quarters around the track in front of cheering spectators to the finish. That year the stadium was under construction and the race started on the street in front of the Sports Complex and finished in the parking lot.

This year Insel Air beat both times to claim the undisputed record at 1:52:53.

Forty-eight teams of 10 runners each entered the race which started and in the Sports Complex at 7:00am Friday.

“Last year we finished third. This year second,” said Jelle Janssens.  “I guess you have to get older to get better,” he said with a smile. Third place went to SXM Tri Academie.

The teams met at Raoul Illidge Sports Complex.  The first leg runners assembled on the track for the start.  The others were distributed around the island. This year a school bus, trucks, vans, motorcycles and even bicycles were utilized to ferry the athletes to their assigned starting position. While organizers stress safety and even ask teams not to use vehicles to follow their runners several teams. Many teams not only paced their runners but had people hanging out of doors and windows causing traffic congestion.

“It was really great to see so many young runners out there,” said Bus who is on the relay organizing committee. “There is so much up and coming talent.” Bus was particularly impressed with the Curacao team.  “They blazed around the island,” said Bus.

The relay consisted of 10 legs ranging in length from 2.25 kilometres to 4.4.  Leg one was the longest of the 10 runners started in the Sports Complex ran out the gate and turned left twice to start up the hill to the scenic overlook. Then it was down the hill toward Marigot to finish and hand over the baton at Almond Grove.

“The relay was well organized and people came out to cheer the runners,” said Bus.

Organizers are already working on making the 30th Relay something to remember.  For the 25th edition the relay was run around the island in the opposite direction. For number 30 an historic website is building built. Organizers are looking for photos of the early relays and hope to document the entire 30 year tradition.

The Around the Island relay was conceived by  Malcolm Maidwell and his runner partner Aly van der Glind in 1987.  They recalled the story of how the island was divided into two by a Frenchman and Dutchman standing back to back and then walking indifferent directions circumnavigating the island to establish the border. The original race featured nearly 20 teams. The largest turn out to date was 60 teams.