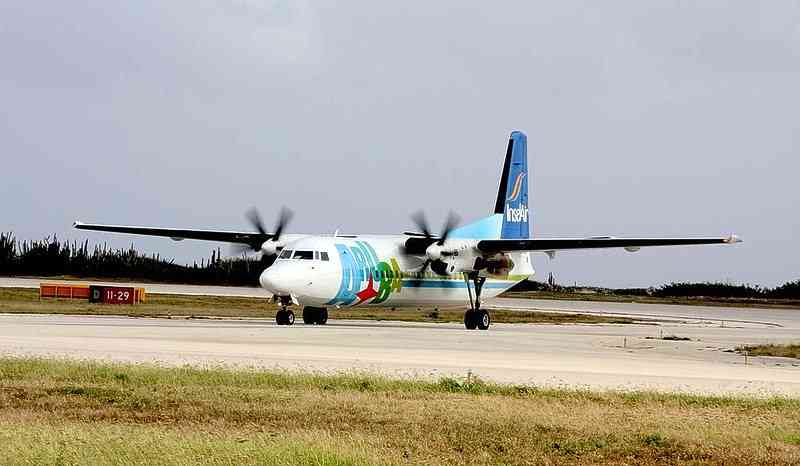 AIRPORT–Irate Insel Air passengers, some stranded since Friday, with others forced to return to their hotels for a second day running, vented their frustration to ground handling staff on Monday when no aircraft was available again to fly to Curaçao and Bonaire.

Some passengers even discussed bringing a class action law suit against the beleaguered airline, citing a total absence of communication and interest in the welfare of its passengers. Somewhere between 50 and 100 passengers were reportedly affected on Monday, with frustration at the departure area almost turning physical.

“Every day passengers are piling up, and today no flight again,” one passenger told The Daily Herald. “Nobody is taking care of anything, and there’s virtually no information as to what is going on. We have been cajoling and threatening them to get some information on when a plane is coming. And they don’t want to charter a plane like they did last week when the other plane broke down.

“There was an alternative last time to send 30 on a KLM plane, but I hear KLM doesn’t want to do that again because it thinks Insel is on the verge of bankruptcy or is bankrupt.
“Meanwhile we are in a cycle of coming early to the airport, hanging around from 9:00am to 4:00pm, no one says anything, and then the flight is postponed or cancelled. Back to the hotel and same thing again next day. But enough is enough. This airline is liable.”

Another passenger said: “These ticketing agent girls don’t have a clue because they are waiting for instructions, probably from Curaçao. There is nobody showing up and saying I’m in charge and I’m going to take care of you. These girls are in tears because they feel helpless and it’s not their fault. This is about negligence and not informing us about what is really going on. That’s the bad thing. And they (management – Ed.) leave those girls to be caught in the crossfire.”

Passengers said they did receive lunch vouchers and complimentary transport.
“This is really a disgraceful way to treat tourists who should be taken care of. You can get away with it for one day, but not four days. The station manager was clearly avoiding the situation and never showed up,” the first passenger added.

Later, Insel Station Manager Pascalle Wong-A-Foe gave assurance that the entire backlog of passengers would be flown out by Wednesday.

“A part for one of the Fokker aircraft we usually send to St. Maarten was missing. The mechanic from Venezuela did not make it as it closed the border, and that caused the issue for St. Maarten,” she explained. “But that Fokker is fixed now. Then the chartered jet could not make it because of a crew issue, but is now arriving tonight (Monday) and the Fokker is also arriving today (Tuesday).

“The reason the Fokker did not arrive Monday is because we also serve the ABC islands and to not lose that connectivity we are sending one chartered jet and two Fokker aircraft to clear the backlog out. I understand it is very inconvenient for the passengers who were counting on leaving today.

“It’s the only way, otherwise we lose the connectivity with the ABC islands. They are also important routes for the company to maintain. It’s difficult to schedule St. Maarten and ABC at the same time.”

Wong-A-Foe said passengers had been turning up at the airport without being called by the airline to do so.

“We need to work on our communication to passengers to prevent them making unnecessary trips to the airport. Some of them show up early without waiting for us to call them. But we are making lists, checking to see who we can send out on other airlines. We are doing our best to contact passengers, so they don’t have to sit and wait.”
She indicated with just one flight a day, Insel Air staff only work certain hours and handle other airlines.

“If a passenger shows up at 7:00am at the airport, they are not going to find anyone from Insel because it is not the regular schedule. Of course, it is something we want to change. But when it happens it means Insel staff are not yet available for the flight because the same staff are dealing with other flights.”

The chartered jet was due to arrive in St. Maarten at 11:00pm Monday night. The Fokker will also depart for Curaçao today with scheduled passengers, and another Fokker will be available if there are remaining passengers, Wong-A- Foe assured.