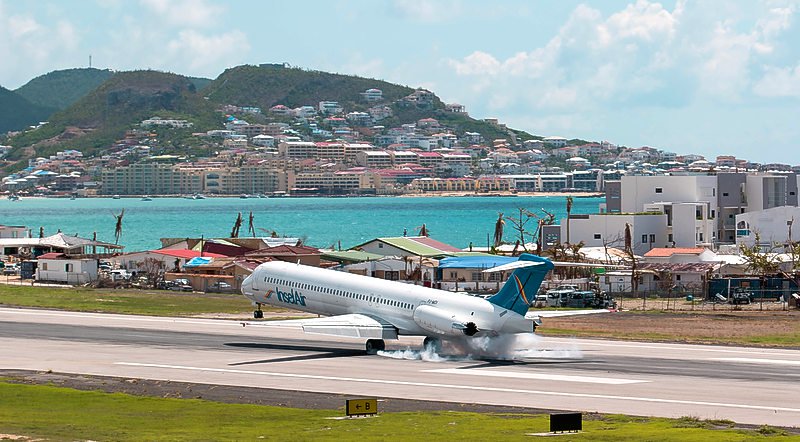 InselAir resumed daily flights between Curaçao and St. Maarten with an MD-80 jet. The arrival of the jet at Princess Juliana International Airport SXM was captured by plane spotter Paul Ellinger.

AIRPORT–Curaçao-based carrier InselAir connected Curaçao and St. Maarten on Thursday morning with a flight executed by one of its MD-80 jets.

That flight marked the restart of daily flights on the route Curaçao-St. Maarten. The flight left Curaçao at 9:15am and touched down at Princess Juliana International Airport SXM around 10:45am. The return flight departed at 11:45am and arrived at Hato Airport around 1:15pm.

The airline had been operating between the ABC Islands (Aruba, Bonaire and Curaçao) and to St. Maarten for the last several months with Fokker 50 aircraft, which it referred to as the “basic” scenario.

The addition of the MD jet to the fleet is an important first step towards the “basic plus” scenario and will further fortify the airline’s financial stability following a major internal reorganisation of the company. Customers will see the return of InselAir to former destinations, which will be reintroduced gradually following financial arrangements with the neighbouring countries.

InselAir will continue its plan to move towards the “optimum” scenario in which the number of destinations will be further expanded, as well as connectivity within the region.