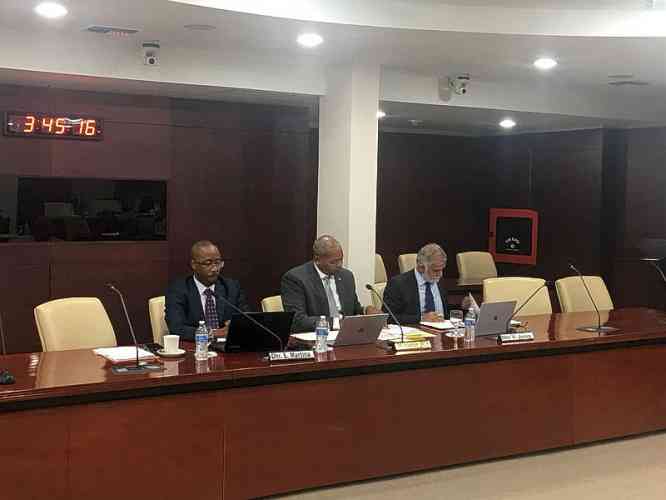 Justice Minister Cornelius de Weever (centre) and members of his delegation in parliament on Thursday.

PHILIPSBURG–An inspection of the Prosecutor’s Office conducted by the Law Enforcement Council found no indication that the office had violated the principles of legality or equality.

A synopsis of the Council’s report was provided to Members of Parliament (MP) on Friday in response to some of their questions posed during an earlier meeting of the Central Committee of Parliament. The meeting was on the agenda point “Petition Justice St. Maarten” submitted to parliament on August 29 by residents after a protest.

During the continuation of the meeting on Friday, De Weever said the council had conducted an inspection of the Prosecutor’s Office in St Maarten to determine what were the office’s investigation and prosecution policies, whether and to what extent there was unjustified selectivity in these policies, and how these policies are applied in practice.

For the inspection, the council looked at the legal framework and policies and whether the Prosecutor’s Office policies are transparent and comply with the principles of legality, legal certainty and prohibition of arbitrariness, and to what extent negative perceptions existing in public correspond with reality.

It is the council’s opinion that the Prosecutor’s Office does not take the person or suspect into account in investigations.

Several recommendations were made; amongst other things, to enhance the effectiveness of law enforcement by the Prosecutor’s Office, the National Detectives and the Police Force. De Weever said he will ask the Council to follow up on whether the recommendations have been pursued on. A copy of the report was sent to Parliament on September 24.

With respect to questions he was asked on specific cases, De Weever said that as Justice Minister it is imperative that he maintain distance from individual cases, noting that it should be left solely to the Prosecutor’s Office and the court to determine when and how to investigate, prosecute and try cases. Unless a minster has strong arguments, that minister should refrain from interfering in activities of the Prosecutor’s Office.

On the question as to who keeps the Prosecutor’s Office “in check,” De Weever said the court, which can throw out cases, and police officers, if they are asked to do something that is not in line with the law.

He said the court can bring in judges for exceptional cases to ensure objectivity.

As it relates to the Asset Recovery Team, he said, no one can be placed above the law and this also applies to the team, which he said has to operate in accordance with the law. Given the experience with looting after Hurricane Irma, one can, to an extent, understand and justify having the team in place, “because once things are going in the wrong fashion and people are prospering from it, the gains of selling those items can be taken back.”

He alluded to the European Court on Human Rights, which says everyone is entitled to due process and a fair hearing in an impartial tribunal, amongst other things. Everyone charged with a criminal offence can be considered innocent until proven guilty.

The Prosecutor’s Office in St. Maarten can keep an investigation open for years depending on complexity of the case and manpower, etc. There is a limit on how long it has until charges are filed and this depends certain factors.

The law enforcement system in the country has been under great pressure for many years, functioning with insufficient staff, knowledge, expertise and quality of material, amongst other things. Each department in the justice system suffers from shortage of personnel. A consequence of these challenges is the length of time it takes for criminal justice cases in St. Maarten to be finalised. Complex cases are delayed because special expertise is needed and this is not always readily available in St. Maarten.

De Weever said that from the moment a person can assume that he or she will be prosecuted, their case should be completed by a judge in two years, subject to special circumstances. An appeal would take an additional two years and may take even longer in more complex cases.