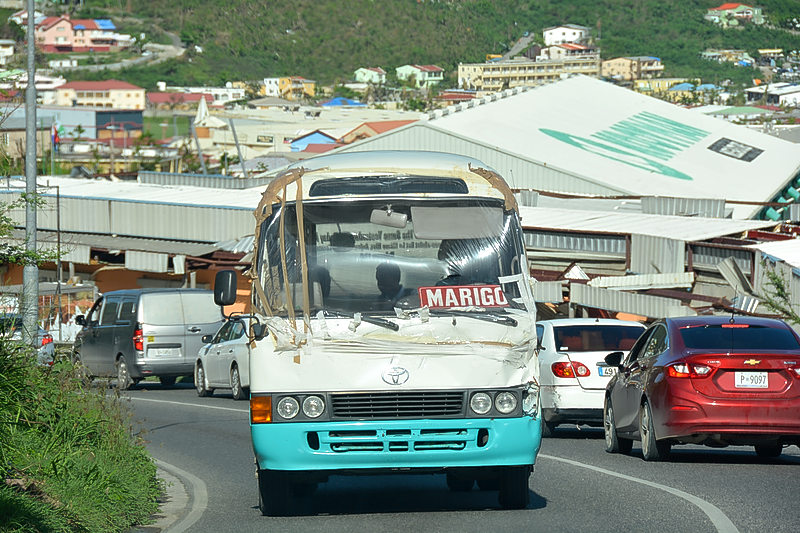 PHILIPSBURG–The Tourism, Economic Affairs, Transport and Telecommunications (TEATT) Inspectorate has taken note of numerous motor vehicles operating on the streets, specifically public transportation, that have in some cases sustained severe damage as a result of the passing of Hurricanes Irma and Maria last month.

The Inspection Department said via a press release Monday that safety in public transportation is the highest priority and cannot be compromised. Based on the traffic ordinance (LBHAM Personenvervoer) a vehicle cannot be put into service or reinstated into service without first being examined.
The same ordinance states that a public transportation permit holder’s vehicle shall be inspected on behalf of the Minister after every major repair, collision or accident whereby damage was sustained. The fee for inspection of a motor vehicle is NAf. 37.80.
The Inspectorate, in partnership with the Motor Vehicle Inspection Centre, announced that inspections of public transportation vehicles and the continued inspection of school buses will commence today, Wednesday.
All motor vehicles engaged in public transportation that have an inspection date prior to September 6 must be inspected. Permit holders are required to report for inspection at the Motor Vehicle Inspection Centre in Philipsburg between 9:00am and 1:00pm Monday through Friday.
Inspections will be carried out according to the law, stated the Inspection Department. School bus operators who have not yet had their vehicles re-inspected should also report to the Motor Vehicle Inspection Centre during the mentioned hours.
Strict adherence to the law will be maintained during the inspection process to ensure that passenger- as well as driver-safety is not compromised.