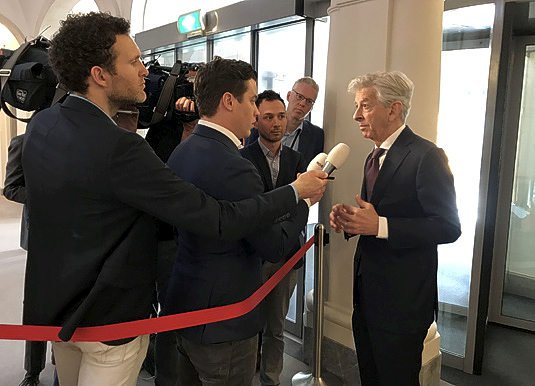 Instruction to set up Integrity Chamber

THE HAGUE–After a delay of two years and much discussion, the Kingdom Council of Ministers on Friday decided to give the St. Maarten an instruction, via a General Measure of the Kingdom Government (“Algemene Maatregel van Rijksbestuur” AMvRB), to establish the Integrity Chamber.

St. Maarten Prime Minister William Marlin said that his government will make use of the possibility stated in the May 2015 protocol, in which St. Maarten and the Netherlands agreed to set up an Integrity Chamber, to file an appeal at the Council of State for the Kingdom in case of differences of interpretation on that same protocol.

The proposal of Dutch Minister of Home Affairs and Kingdom Relations Ronald Plasterk, which the Kingdom Government adopted on Friday, was based on various older reports which, in the opinion of The Hague “shows that corruption, bribery and nepotism took place in all layers of society, also within the political administration.”

According to the Dutch Government, there had been an agreement with Philipsburg to secure legislation to set up the Integrity Chamber. “Ultimately the St. Maarten Government, with the support of the St. Maarten Parliament, didn’t want to implement this legislation,” it was stated in a press release issued by the Ministry of Home Affairs and Kingdom Relations BZK.

In the opinion of The Hague, this course of action “made clear that St. Maarten didn’t have the intention to on its own tackle integrity issues in an adequate manner.” “Considering the severity of the situation, the Kingdom Government has seen it fit to give content to its responsibility for proper governance in the Kingdom and to secure the Integrity Chamber through an AMvRB.” The AMvRB has been sent to the Council of State for advice, as the procedure prescribes.

Plasterk told the media after Friday’s meeting that the Integrity Chamber was a necessity. “There are four research reports that state that the underworld, for example the gambling sector, and the upper world, including the political administration, are in collusion too much and too often. We had an agreement two years ago. This agreement was unilaterally ditched by St. Maarten. The Kingdom Government has now said that this is not acceptable because proper governance is at stake,” he said.

The Minister said he remained hopeful that a consensus could still be reached in the time that the AMvRB has gone to the Council of State for advice and the actual implementation in a few months. He said that this was his “preference by far.” He said it would also be “better” for St. Maarten if the Integrity Chamber was installed by consensus.

For the Kingdom Government the establishing of the Integrity Chamber is a must. He said that integrity was a “serious problem on several fronts” in St. Maarten. “It is in the best interest of the island and its people and ultimately for their wellbeing that this is carried out.” He said that the measures taken so far by the St. Maarten Government were insufficient. “More needs to happen.”

Once ratified, the St. Maarten Government will have no choice than to execute the instruction that is based on a legitimate decision. “It has to be complied with, one way or the other. St. Maarten will have to conform itself to the rule of law within the Kingdom.” He said that the Kingdom consisted of four countries and that everyone was bound to stick to legitimate decisions.

The text of the original draft AMvRB of two years ago has been slightly adapted to incorporate some of the suggestions of the St. Maarten Constitutional Court. The AMvRB proposal states that the Integrity Chamber will have supervisory and advisory tasks, and that it will investigate suspected cases of integrity violations. The Integrity Chamber gives binding advice to the St. Maarten Government how to handle these violations.