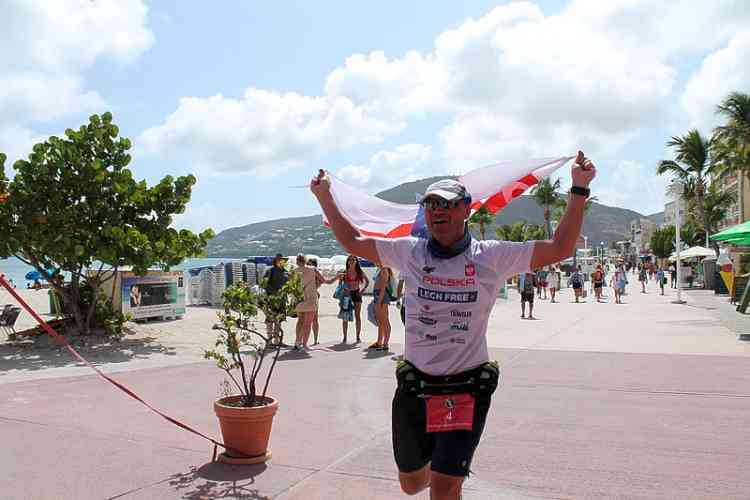 PHILIPSBURG–World renowned marathon runners who disembarked from cruise ship Carnival Fascination on Tuesday, faced brutally hot running conditions for the marathon organized once again by Tri Sport on behalf of Z Adventures. The course was a repeat of 2016 and 2017, set mostly on the Boardwalk in Philipsburg following a leg up to Fort Amsterdam and back.

The third edition of the Southern Caribbean Challenge attracted runners with jaw-dropping resumes from USA, Germany, Czech Republic, Canada, Poland, Australia, Pakistan, Italy, Taiwan and the Philippines. The group took part in seven marathons in Puerto Rico, St. Thomas, St. Maarten, St. Kitts, St. Lucia, Barbados and one on board the cruise ship.
Such was the heat that many of the participants walked and ran intermittently on the Boardwalk taking much of the day to complete the distance. First to finish was Germany’s Rico Bocagz, the youngest member of the group at 31, who had already completed 244 marathons in 50 countries. He also won the first edition of the Eastern Caribbean Challenge held in March on both sides of the island. This time, the marathon took him one 1hr 50 minutes longer to complete than the one in March, finishing in a time of 5 hours and 58 minutes.
Attention on this cruise was on Wojciech Machnik from Poland, who is attempting a Guinness world record for completing the most marathons in one year. The current record holder is Dan Micola from the Czech Republic, also on the cruise, with 58 marathons in 58 countries in one year. Wojciech is currently at 53 marathons and is likely to break the record in Africa on the next trip of seven marathons in one week.
Also making a return was paraplegic athlete Beth Sanden (64) on her specially adapted bike. She was wearing a visor to deflect the sun from her face and completed her laps on the Boardwalk. The oldest runner was Lichu Sloan from Taiwan at 71, who has completed 230 marathons in 90 countries across all seven continents. She started marathon running at 52. St. Maarten marked her 240th marathon.
The heat was no problem for Australian nurse Jane Trumper who famously became the first woman to run 660k across Simpson Desert in Australia in 10 days in 45 degrees centigrade.
“The first day I ran 72K and drank 20 litres of water,” she recalled. “Hokka sponsored my shoes and said I had to be the first woman to do it.”
On this cruise she was completing her 300th marathon. She has also run self-supported from England to Rome (2,300k) in 2014 which took 41 days. “That was tough because I was totally on my own.”
At the end of the week-long cruise all the runner times are added up for the seven marathons and the ones with the shortest completion time win a prize; top three males and top three females.