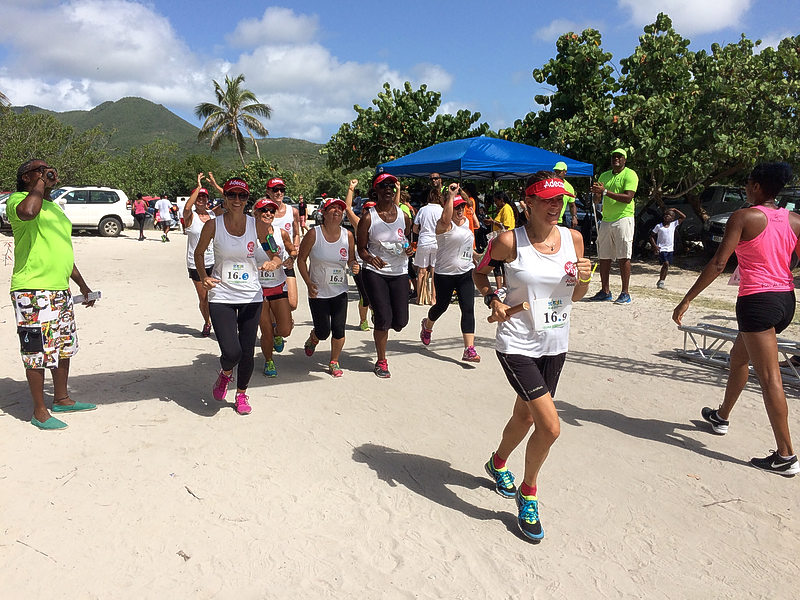 MARIGOT—The Inter Generation Runners Team won the 10th Semsamar Inter-Company Relay Race for the second year in a row on Sunday, but did not beat the race record.

Inter Generation’s Wilfred Sully ran the final leg, coasting in under the finish banner at Le Galion Beach to record the winning time of 2:04:01. SXM Tri- Academy (2014 winners) finished in second place, just 33 second adrift in 2:04:34. Third place went to SXTreme 1 in 2:15:39 and fourth place to the Pompiers Team (French Fire Department) in 2:15:42. The Louis-Constant Fleming Hospital was in fifth place in 2:16:13.
The race began in the Lowlands at 6:00am and finished at Le Galion. This year the race enjoyed its biggest turnout ever with some 300 runners in 30 teams. Daily Herald colleagues, Le Pélican Team, finished in 12th place, the only media team to take part.
Semsamar President Wendel Cocks and Semsamar Director General Marie- Paule-Belenus Romana both participated in the race.
One of the new teams taking part for the first time was the French Justice Team composed of lawyers and justice officials. Vice-Prosecutor Michaël Ohayon noted he ran the Sandy Ground to Lowtown leg in 16 minutes, overtaking three runners in the process. The team is looking forward to participating in the November 11 around the island relay race.
All the finishers gathered on the beach for the prize giving and breakfast. There were loud cheers for the slower teams as they came into the finish.
Proceeds from the race amounting to 3,700 euros was presented to the association Jeunesse Soualiga.