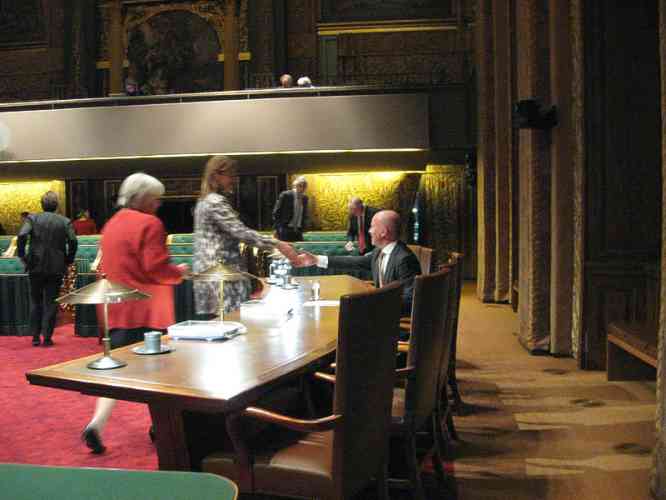 The unanimous approval came just in time for State Secretary Raymond Knops to take a night flight to Statia and offer an explanation to the Island Council, Executive Council and people. In addition, local government officials will be dismissed and the Government Commissioner and his deputy will be appointed.
“I will travel to Statia tonight joined by the government commissioner and his deputy. Both will be appointed after the resignation of the Island and Executive Council,” said Knops, who was not prepared to disclose any names yet. He said a deputy was necessary to guarantee continuity on days the Commissioner is not present in Statia.
“Also, all people are invited for a Town Hall meeting where I will offer an explanation for this measure. I have no idea how they will react, but I honestly hope that people are willing to help,” he said. The people of Statia are also invited to share their views in a so-called “Maatschappelijke Adviesraad” (Community Council).
To some extent, the Dutch Senate expressed concerns similar to those in the Second Chamber, which unanimously approved the intervention earlier on Tuesday.
Meta Meijer of the SP stressed the need to have Island Council Elections as soon as possible. “There are many loyal and wise people in Statia, who are willing to take on responsibility. Why wait until 2021? Why isn’t it possible to have elections in 2019 or even before then?” she asked.
Knops said he also wants elections to take place sooner rather than later, but expressed his fear that it will take a long time before the atmosphere in Statia is right for elections. “I agree that there are many good people in Statia, but if elections are held too soon, the existing feelings of fear and intimidation will resurface and honest people won’t have a chance to thrive,” he said.
Related to this, Sophie van Bijsterveld (CDA) and Thom de Graaf (D66) asked about the transition to the moment where Statia can be governed by the people of Statia. Van Bijsterveld proposed to have an Island Council cooperate with the Dutch Government Commissioner during the last phase of the intervention, while De Graaf suggested that it might be possible to gradually make certain government tasks a local responsibility.
Knops said he was prepared to consider these options, but that he preferred to wait for input from the Government Commissioner.
Without exception, all Senators stressed that the Dutch government was also partly responsible for the current situation. “People in Statia are not happy with The Hague because of the way they were treated since 2010,” said Henk ten Hoeve of the independent OSF party.
Ruard Ganzevoort of GroenLinks reminded Knops of the endless debates about a social minimum income for the people of Statia, Saba and Bonaire.
Knops acknowledged that the Dutch approach should have been much better. He will ask the Council of State (Raad van State) for advice about possible improvements and his coordinating role, but has also initiated changes in The Hague. From now on, Dutch Ministers will be more involved in decisions about Statia, Saba and Bonaire instead of only department representatives.
“In the Dutch Council of Ministers (‘Ministerraad’) there is a lot of sympathy for the Dutch Caribbean and willingness to help. What we need to do now is to win back the trust of the Caribbean people and also have our words followed by actions. People need to feel that things are improving,” he said.