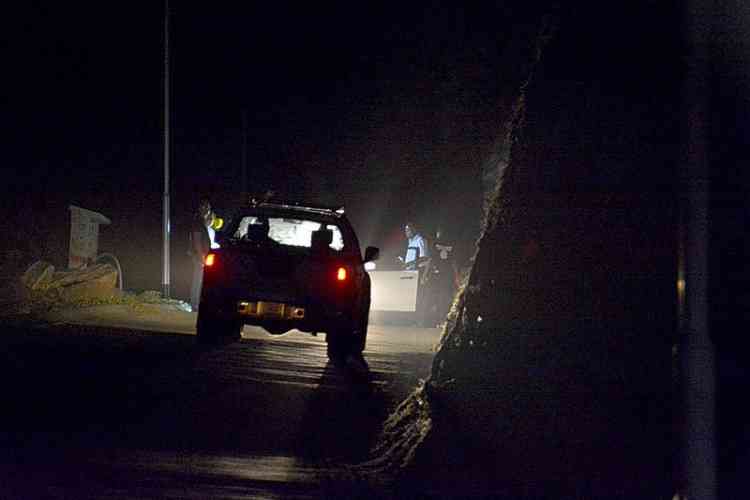 Police investigators carrying out a re-enactment of the fatal August 27 shooting at Chincherry Road in Pointe Blanche on Wednesday evening.

POINTE BLANCHE–Police officers and detectives of the St. Maarten Police Force carried out a re-enactment of the fatal August 27 shooting at Chincherry Road in Pointe Blanche on Wednesday evening in the presence of the man who allegedly shot down a would-be robber.

The shootout on Chincherry Road left one of the robbers dead in the street and another on the run. The alleged robbery victim, who lives in the area, and his son claimed they were ambushed and shot at. The father reportedly returned fire in response, killing one suspect.

Police responded to reports of gunfire around 11:00pm. On arriving at the scene of the shooting they found one person dead and immediately launched a search in the area for another suspect who, according to the victim, was part of the robbery attempt.

According to a press release issued by police spokesman Chief Inspector Ricardo Henson, the victim and his son were driving in their car when they were attacked by two unknown male suspects armed with guns who attempted to rob them. The victim and son did not suffer any injury during the shooting.

The alleged robbery victim and his son were taken into police custody for questioning while police cordoned off the area.

One suspect in the investigation was released on September 6. As a result of the ongoing investigation the pre-trial detention of the other suspect was extended on that same day, the Prosecutor’s Office said.