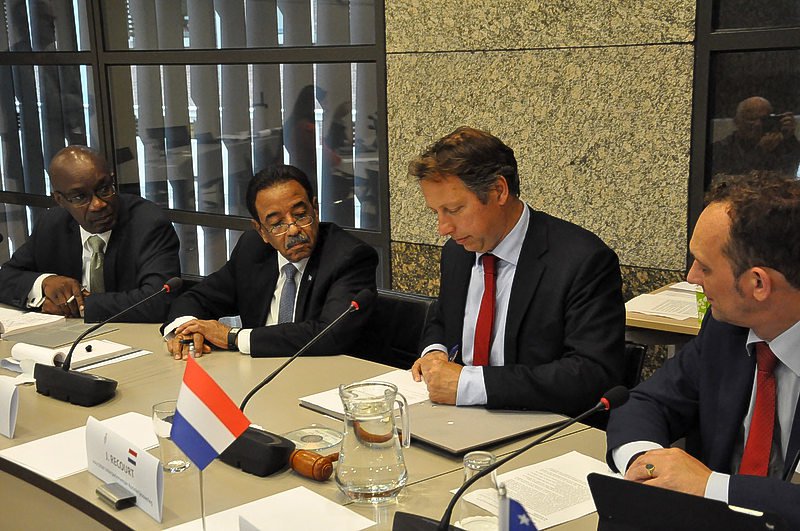 THE HAGUE–The Inter-Parliamentary Consultation for the Kingdom IPKO was closed on Friday on a positive note with concrete agreements, despite the intensive discussions about the legal format of the Dispute Regulation (“geschillenregeling”) and the integrity in government. The overall feeling was that many small steps were taken to build a stronger IPKO.

After internal consultation on Friday morning, the delegations gave their consent to the Agreements List. One of the points that required further deliberation was the Dispute Regulation and the proposal of the Aruba delegation to keep the options open to involve the Council of State in the dispute-settling process.

It was ultimately decided that the two existing Kingdom Law proposals for a Dispute Regulation, the one of the Dutch Government and the other of the three Dutch Caribbean countries combined, would be submitted for the legislation process at the Dutch Parliament.

In the Agreements List the delegations of the Parliaments of the Netherlands, Aruba, Curaçao and St. Maarten, it was stated that on a Parliamentary level it will have to be decided whether both draft Kingdom Law proposals complied with the three points of departure of the IPKO for a Dispute Regulation: independent dispute-settling, dispute-settling through a binding ruling, and a limitation to strictly legal disputes involving the interpretation of the Kingdom Charter.

Aside from a special Court for the Dispute Regulation, which is stated in the law proposal drafted by the Dutch Caribbean countries, it was agreed that the Supreme Court and the Administrative Jurisdiction Division of the Council of State “could be considered.”

Only for disputes between the Kingdom partners of a “political-administrative nature, an authoritative, non-binding” advice of the Advisory Division of the Council of State could be sought. The specific difference between the two kinds of disputes would have to be further assessed and defined. The Parliaments agreed to hold periodic talks before and during the legislation trajectory.

In the Agreements List the parties confirmed that the Dispute Regulation based on article 12a of the Charter should be quickly realised, and called on the Kingdom Government, the governments of the countries and the Dutch Parliament to give “content in a befitting manner to the urgent character” of achieving a Dispute Regulation.

The delegations were satisfied with the results. “I look back at the meetings with satisfaction. I am proud that we have managed to secure an agreement year after year. Maybe we could have achieved a bit more on the Dispute Regulation, but still we managed to take a step,” said IPKO Chairman and Member of the Second Chamber of the Dutch Parliament Jeroen Recourt, who lauded the continued efforts to build better, stronger relations between the Parliaments.

Dutch delegation leader Senator Ruard Ganzevoort thanked all participants for their involvement and positive contribution. “We continue to build step by step.” He called the agreement regarding the Dispute Regulation a “milestone.” “We now have two law proposals on the table. We can now start the Parliamentary procedure, which is very positive.” He said this contributed to better relations within the Kingdom, something that would ultimately benefit the people.

Vice-chairman of the St. Maarten Parliament George Pantophlet agreed that taking small steps was a good thing, but that he would like the steps to be set a bit faster, especially where it regarded the Dispute Regulation. He said that the elections in St. Maarten late September would have no negative impact. “We are one on this. No matter who is in government, we all want a Dispute Regulation.”

Chairman of the Curaçao Parliament Mike Franco spoke of a “very good atmosphere” during the meetings, despite the occasional clash and harsh words when topics such as integrity and the Dispute Regulation were on the agenda. “There were some confronting moments, but we managed to get out it,” he said.

“Nobody walked away from a good debate. But that did result in more overall clarity,” said Chairman of the Kingdom Relations Committee of the Curaçao Parliament Elmer “Kadè” Wilsoe. He said it didn’t matter who won on the issue of the Dispute Regulation. “This is not a match. What matters is that an instrument is established where we can take our disputes so they can be solved. There already have been too many squabbles in the Kingdom.”

Chairman of the Kingdom Relations Committee of the Aruba Parliament Rene Herdé said the delegations had worked hard to make progress. “We have done a lot. We are not there yet, but we took some steps. We tried to break the ice and hopefully this will result in a Dispute Regulation on short term, hopefully this year.”

Once established, the Dispute Regulation will lead to improved relations within the Kingdom. “We will enter a new phase in the Kingdom. We can tackle the issues that we agree on with enthusiasm and seek solutions through the Dispute Regulation for matters on which we disagree,” said Herdé. He remarked that even though the IPKO was not a Kingdom Parliament, the IPKO did prove a useful platform for intense discussions and a place to come to agreements.

The next IPKO will be held in Curaçao, from January 10 to 13, 2017. On the agenda will be mostly recurring topics that affect the citizens of the Kingdom, including education, youth and youngsters, public health, economic development, discrimination and the climate change.