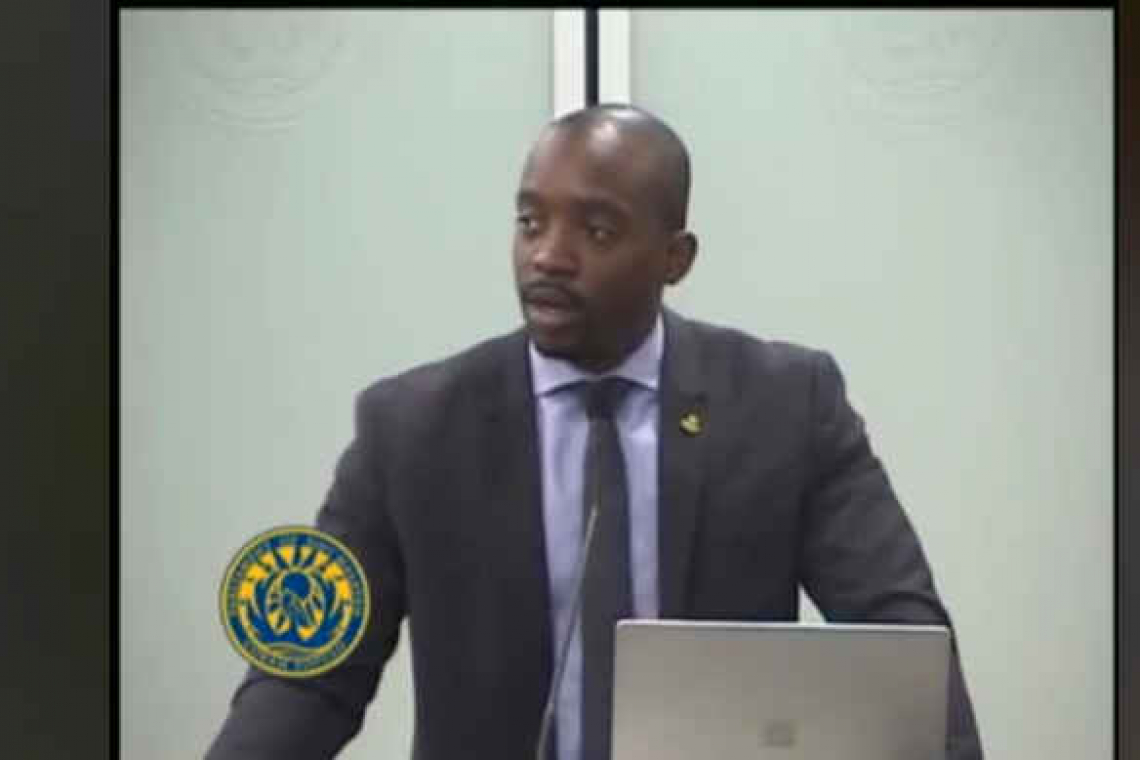 PHILIPSBURG–While expenditure for the “disaster year” 2020 was originally budgeted at NAf. 610.6 million; actual expenditure stood at NAf. 570 million, a difference of 40 million, the draft 2020 budget amendment presented to Members of Parliament (MPs) by Finance Minister Ardwell Irion in a meeting of the Central Committee of Parliament on Friday shows.

While income was originally budgeted NAf.  455.7 million, the draft budget amendment lists income at NAf. 337.1 million. This reflects a deficit of NAf. 233.9 million.

“To prevent that we are violating the allowed budget deficit it is important to continue with the budget amendment today [Friday – Ed.],” he explained.

While the handling of a budget for a period that has already passed has little added value for its use as a management tool for Parliament, Irion said it was important to establish the expenditures that were made by government, necessary to support the economy, keep the government operational and to take the necessary social and medical measures. “This 2020 budget amendment is also important to make the financing (loans) of the costs of our public expenditures legitimate.”

He said the 2020 budget amendment had become necessary because the projections of the country’s revenues needed adjustments, as the figures realised for the months of March, April and June and considering the International Monetary Fund’s (IMFs) downwardly revised projections, which expected a fall in the gross domestic product (GDP) in 2020 of between 25 and 30 per cent (original projection for three months was between nine and 15 per cent). This led to lower projected income.

Also, the implementation of the stimulus programme was not completed as quickly as initially expected and required adjustments partly due to the conditions attached to the financing by the Netherlands. Ultimately, the St. Maarten Stimulus and Relief Programme (SSRP) led to higher expenses.

The additional conditions laid down by the Netherlands also required the adjustment of the expenses of the Members of Parliament and Ministers; the cost of staff of government, subsidised institutions and entities such as foundations, schools and non-governmental organisations (NGOs); the legislation on the pension scheme to be introduced on July 1, 2020; legislation to be introduced as of July 1, 2020, on raising the age limit for old age pension (AOV) from 62 to 65 years; and other reductions and savings advised by the Committee for Financial Supervision (CFT) regarding the financing of specific cost of the stimulus programme out of the country’s own budget because it would not be covered by Dutch COVID-related financing.

By extension, the projection of the debt position needs to be updated.

In 2020, government was able to lower expenditures by scaling down the SSRP; decreasing personnel cost given the 12.5 and 25 per cent reduction; taking the pension reduction into account; and reducing personnel related cost (travel, uniforms, training etc.).

Irion said all income categories had declined, but taxes were the main contributors to the decreased income. “In total, we were able to reduce our expenditures by about NAf. 39 million, despite the projection of a longer crisis than originally expected.”

United St. Maarten Party (US) Party MP Claudius “Toontje” Buncamper wanted to know what were the total budgetary expenses that can be turned back due to the court case initiated by the Ombudsman against the validity of the cost-cutting laws in view of the equality of the laws and the restrictions of freedoms of the persons affected.

He also asked how much funds were not used for capital investments in 2020 and why; which programmes and projects did investments include; and whether government had received an instruction not to use monies by the Committee for Financial Supervision CFT, amongst other questions.

United Democrats (UD) MP Sarah Wescot-Williams said that during Friday’s meeting MPs finally received the financial prognosis of the country. Given the actual situation of government, she asked how the government is announcing capital projects if the amended budget has no capital funding.

She also asked what is the status of the justice workers’ payment and requested a complete overview of government’s insurance coverage, including the regional disaster risk insurance, providing appraisals and payouts; parliament’s financial administration, contracts, retainers etc.; government’s financial relationship with Social and Health Insurances SZV and Mental Health Foundation (MHF); amongst other things.

She also asked whether the Princess Juliana International Airport (PJIA) saga has any bearing on the liquidity assistance, whether government had responded to Schiphol’s letter and whether there had been another Schiphol letter.

The draft amendment is expected to be handled in a public meeting on Tuesday.