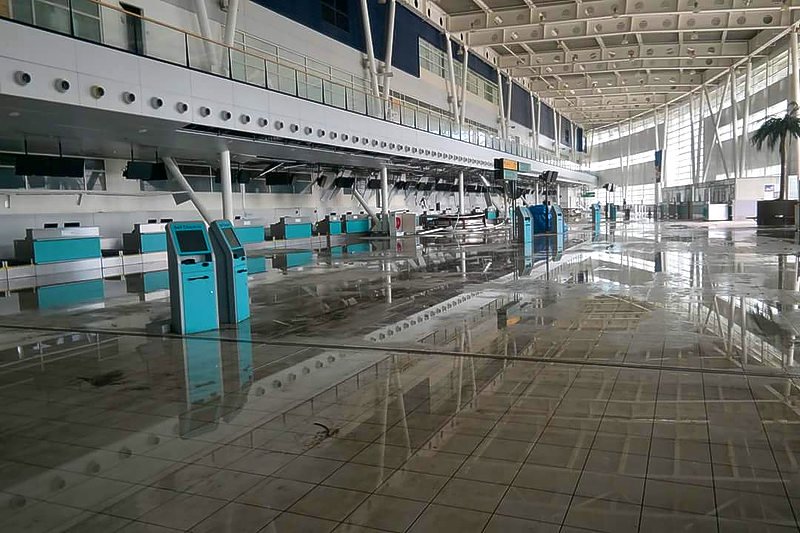 AIRPORT–Hurricane Irma dealt a severe blow to Princess Juliana International Airport SXM on September 6, conservatively estimated in the tens of millions of dollars, according to a first-hand assessment of the damage.

Minister of Aviation Mellissa Arrindell-Doncher told The Daily Herald this week that Airport management is still carrying out in-depth assessments of its internal and external facilities, the majority of which has suffered heavy to severe damage.
“The Airport infrastructure was not spared from the devastation caused by Hurricane Irma. The management of Princess Juliana International Airport Operating Company N.V. PJIAE has adopted a disaster recovery plan to address the issues required for the resumption of civil and cargo flights into St. Maarten as soon as possible,” the Minister said.
She added that while she understands the frustration of residents abroad wanting to come home and those in St. Maarten wanting to leave, the normalisation of commercial flights cannot commence until the airport is fully ready to service these flights. The Airport, she explained, falls under several regulations in terms of safety and operations of international flights.
“We cannot jeopardize the status of the airport and that of St. Maarten by rushing operations at the airport,” she said.
She said all areas at the airport had suffered water damage, while in specific areas there has been damage resulting from flying objects and parts of the falling ceiling throughout the terminal building.

State of the Airport
The entire perimeter fencing was destroyed and all four jet bridges (boarding bridges) sustained substantial structural damage. The swing cabs were blown off all four bridges and all metal entrance doors attached between the bridges and the terminal building were blown in.
All runway and taxiway lights and precision approach path indicators (PAPIs) were destroyed. The shoulders and a section of the runway were under water due to swamping in the area. All vehicles suffered water/impact losses and one crash tender is a total economic loss and needs to be replaced quickly so that commencement of operations is not further delayed.
The Daily Herald understands that approximately 75 per cent of roof sheeting and insulation was destroyed in the terminal building. The ceiling is exposed, with areas that are severely cracked exposing the inside of the terminal to outdoor elements. Water could be found on all four levels of the terminal.
Many of the sheetrock wall partitions accumulated water and are water damaged. Build-up of mould throughout the terminal is visible and all ceiling tiles on all levels were damaged by the water. Additionally, all four curved entrance doors to the terminal were blown inward into the building.
Throughout the entire building there is physical and water damage to all sections, including but not limited to the public announcement system, telephone, check-in areas, airlines’ back offices, airport executive offices, security offices, airlines’ reservation/ticket kiosks, tourist booth, car rental booth, food courts (on level 0 and 1), concessionaire offices and leased spaces, Customs office, baggage claim area, automated Border Control E-Gates, Automated Passport Kiosks, Bar Code Border Pass E-gates, terminal seating, common use terminal equipment (CUTE) and common use self-service (CUSS) kiosks, all departure sections, extensive water penetration in the baggage handling area on level 1, departure section and “employee screening” areas.
The Minister explained that the airport is insured with a local insurance company and, given the magnitude of Hurricane Irma’s impact to the island, adjusters have been flown in to assist the Airport in the management, preparation, quantification and resolution of its claims as a result of Hurricane Irma.
She said key points of priority have been established particularly by and between the Airport’s Finance Department and other relevant internal departments so that orders for equipment, parts and material for reconstruction can be placed timely to prevent any further delays in reaching 100 per cent operational mode soonest.
Airport management will follow an established recovery process, executed in phases, with the aim of quickly resuming normal operations. The Minister estimates that Airport SXM will not be back at full operation capacity “in all its glory” for another 35 weeks, but will be able to function optimally much sooner than that.

Recovery
The recovery process is grounded in several action points that include, but are not limited to (not in sequence):
Restoration of the aerodrome perimeter fence. Priority is placed on this aspect as ICAO standards require all civil airports to have suitable barriers to prevent the entrance to the movement area of animals, unauthorised persons or vehicles to be a hazard to aircraft.
Initiate insurance claim and work with insurance to replace critical systems expeditiously.
Initiate assessment and purchase of preliminary terminal roof repair.
The runway integrity assessment will be carried out.
Order and replace critical operational systems, convene regular meetings with stakeholders to ensure clear lines of communication and provide updates.
Removal of the remaining sheet metal, the omega profiles with halters, and the insulation and plastic foil. The use of the Fixed Base Operation building (FBO), the baggage sortation/delivery area and the East end of the terminal as the processing halls.
Attain critical systems needed for Air Traffic Services (ATS) to perform separation (classification D) of traffic.
Complete financial restoration plan to substantiate financial viability.
Set up of kiosks for the concessionaires to sell products and goods.
Finalise and install permanent roof on terminal building and purchase and install other systems needed for restoration of operations.