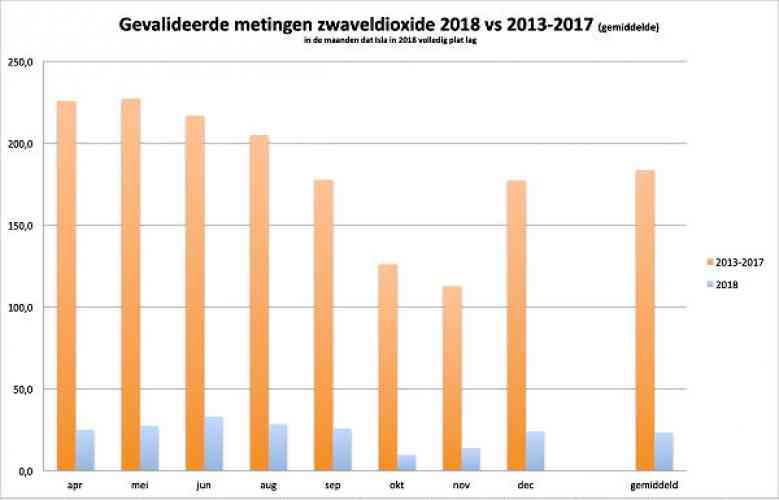 WILLEMSTAD–Curacao’s Isla refinery contributes more than mcg/m3 (micrograms per cubic metre) of SO2 (sulphur dioxide) and must be made to pay a fine of NAf. 75 million, according to the demand in an appeal case brought by environmental organisations SHZC, SMOC along with residents living downwind of the refinery leased by “Petroleos de Venezuela” PDVSA.

According to Isla, the recent high SO2 measurements were also from other sources such as water and electricity provider Aqualectra, government’s Curacao Refinery Utilities (CRU) power plant, road traffic and shipping). Its own contribution is supposedly less than 80 mcg/m3, which is also what experts from the Netherlands appointed by the court estimated Isla’s part in the pollution.

SMOC has been trying for years to prove that these calculations were incorrect, because the measurements of SO2 are much higher than what the experts say. “The data they used came from Isla and was, as SMOC proved time and again, incomplete and often incorrect. The experts did not want to perform a validation, did not calculate the contribution from the other sources and held onto their calculations for Isla alone: ​​less than 80!

“Now that Isla has been inoperative for almost a year, there are measurements that prove the contribution from the other sources is very small and the experts were completely wrong with their calculations. The accompanying graph with validated measurements shows the months in which Isla was completely inoperative compared to the same months of the years 2013-2017. Only the other sources, including CRU, were now measured.”

CRU did not operate at full capacity in 2018. When it does the contribution is 30 mcg/m3, so it has been established in the court cases. Isla’s part is therefore on average much higher than 80 mcg/m3 in almost a year, and according to the 2010 judgment, PDVSA must then pay a fine of NAf. 75 million, argue the plaintiffs.

“That seems like a lot of money, but according to a very recent press release from Isla, PDVSA has paid NAf. 270 million per year in maintenance and investment,” says SMOC, adding that the troubled state-run Venezuelan oil company has earned approximately US $500 million (tax-free) for 30 years leasing the refinery and the related storage and transhipment facility at Bullenbaai.