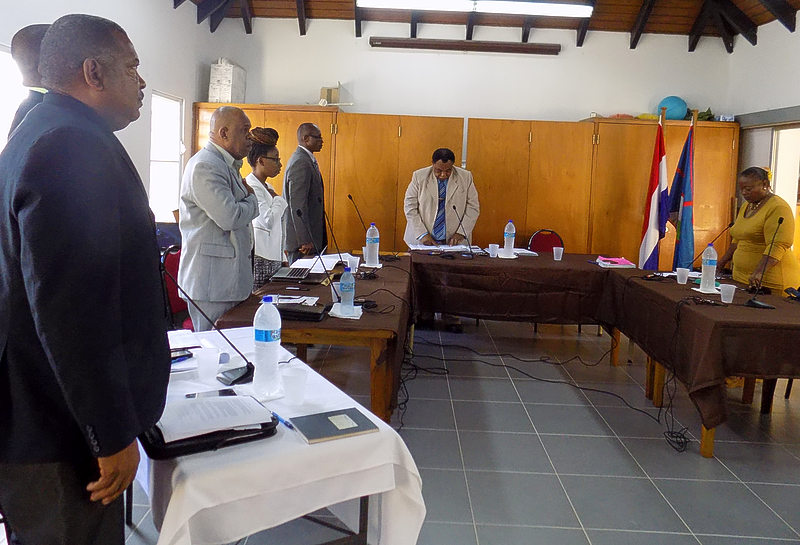 ST. EUSTATIUS–The Island Council of St. Eustatius has instructed the Executive Council to investigate the functioning of Health Insurance Office ZVK. In an adopted motion the Island Council called for an investigation into the provision of healthcare insurance for residents of St. Eustatius. The motion also calls for a study into the cost of healthcare and instructs the Executive Council to explore the possibilities to appoint one or more alternative healthcare providers for Statia.

The motion was adopted during an extraordinary Island Council meeting, which was called after a number of alleged cases of patient mismanagement by ZVK. Two specific cases were highlighted during the meeting, in which one person reportedly died due to inadequate medical care and another other was flown off island by a third party due to a reported lack of urgency in her care.

The motion that was passed instructed the Executive Council to commit to and comply with the instructions given in a previous motion on this subject, which was adopted on September 8, 2016.

During the deliberations independent Councilman Reuben Merkman said he wanted to look into the possibilities to allow patients to choose the location at which they would like to receive medical care and to seek one or more alternative healthcare service providers.

He said that when dealing with a medical issue, being in a good frame of mind goes a long way towards recovery. Merkman said that too often Statia patients have to argue with ZVK to get their referrals handled so they can be seen by a doctor. “The waiting times can sometimes be as long as two years,” Merkman said.

Rechelline Leerdam of Progressive Labour Party (PLP) said that healthcare is a costly affair. “It has been said that insurance is free, but I know that is not the case. Every month 30.4 per cent of my salary is paid towards taxes, and my employer pays 18.4 per cent, a portion of which goes towards healthcare.”

Leerdam said the “blame game” between ZVK and medical doctors in relation to delays, patient records and referrals needs to stop. Dialysis patients are still coming in on the last flight and have to wait hours in the airport, she said.

“Residents have been paying the same amount of premiums for less and less each year. Many persons are hesitant and afraid to file complaints against ZVK as they have experienced personal retaliation from the Office when seeking referrals or medical treatment. They have experienced a substantial increase in waiting time compared to other patients,” Leerdam claimed.

According to PLP leader Van Putten there have been more incidents with patient deaths since the general healthcare insurance was introduced because of what he described as “the indecisive manner in which they [ZVK – Ed.] have handled medical referrals.

He said the system needs to be looked into as he believes patients from Statia are being treated without their best interests in mind. “ZVK sends patients from Saba and Bonaire to Colombia, but those from Statia get sent to St. Maarten and Guadeloupe.”

Van Putten said most patients from Statia say they feel more secure with the treatment they receive in Colombia. A Colombian doctor had told him, however, that ZVK waits until patients are at “death’s doors,” then send them and expect the doctors in Colombia to perform miracles.

“So far this year there have been seven funerals that could have been avoided had those persons received adequate medical care. One of these cases included a prominent businessman who died while in Colombia. This should be looked into [as – Ed.] a criminal case and not be treated as something that just happens.”

Van Putten said ZVK’s delays in referrals abroad are “shameful.” In referring to a recent case in which NuStar had stepped in to fly one of its employees’ wife out to Miami, Florida, for medical treatment, he said that cases like these “make it the more urgent that something be done now, rather than later.”

Councilwoman for the Democratic Party (DP) Adelka Spanner referenced to her time as Commissioner of Health when Statia had control of its healthcare system. Back then only civil servants had health insurance and even then the bills sometimes were not paid, she said.

Spanner said she would not be voting on the motion, as the motion was basically the same as the one that was adopted in September 2016. She said that motion needed to be carried out before calling any other motion to a vote.

The motion, however, was still put to a vote and adopted with council members Van Putten, Leerdam and Merkman voting in favour. DP Councilman Koos Sneek was not present as he was off-island.

January 24, 2021
0
Ton Maan PHILIPSBURG--Former Chief Prosecutor in St. Maarten Ton Maan will be the new attorney general at the Prosecutor’s Office of Curaçao and St. Maarten and of Bonaire, St. Eustatius, and Saba, as of April 1, 2021.  Maan was nominated...
Read more