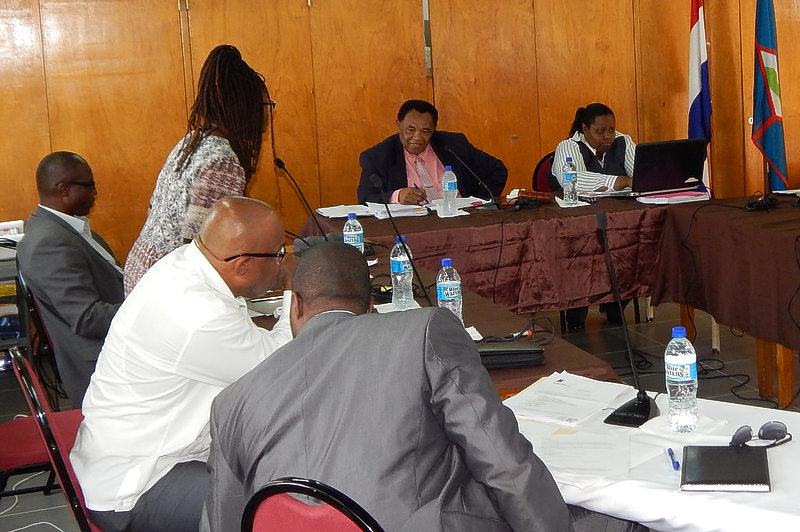 ST. EUSTATIUS–Topics such as the Marine Ordinance, Emancipation Day (July 1) as a national holiday and a national day of prayer were discussed during Friday’s Island Council meeting in absence of Commissioner of Constitutional Affairs Derrick Simmons who was in the Netherlands.

The meeting started off with some controversy during the setting of the agenda. Island Councilman for Progressive Labour Party (PLP) Clyde van Putten wanted an explanation on why the requested agenda points on the amended NuStar agreement and the budget for 2017 were not added to the agenda.

The Chairman explained that the two agenda points were so important that he voted “no” in the Executive Council. Since Commissioner Simmons was off island the vote tied, as one Commissioner cannot vote for another.

Koos Sneek of opposition Democratic Party (DP) agreed with the Chairman that the agenda points should not be added to the agenda. Sneek stated that the State Attorney’s advice on the NuStar agreement was sent to different Ministries in The Hague. He stated that the amended agreement was on the right track, but the agreement is still lacking certain things and it is not yet in accordance with the law. If the Island Council was to pass the amended agreement it would be turned down and on top of that, the budget would also be turned down, Sneek said.

Van Putten said that if the budget were to be turned down due to, in his words, “stalling tactics” by the State Attorney, he would be taking the Minister to Court.

He said that a lot of political games are being played in relation to the amended NuStar agreement and also the 2017 budget. Van Putten stated that they were getting indication that if the budget is not passed by May 25, civil servants would not be paid.

A vote was called for by Van Putten to have the two points added to agenda. The motion passed three against one, with independent Reuben Merkman, Rechelline Leerdam (PLP) and Van Putten voting in favour. Sneek voted against the motion.

But since the agenda points were not finalized in the Executive Council, Chairman Woodley said he would not be adding the two points to the agenda.

The Marine Ordinance was adopted in a three-to-two vote, with the instruction that the issue with the Ordinance be amended by bringing it back to the Island Council.

Van Putten then gave a brief explanation of why he had the intention to make Emancipation Day a national holiday.

He said that both renowned philanthropist the late Miriam Schmidt and the late Christine Flaunders-Roosberg both had tirelessly and “to their dying day” tried to get this day established as a national holiday, as the cultural significance of this day is so important.

Councilman Sneek stated that he agreed, but he pointed out that the Island Council only has the authority to chance two holidays, namely the day after Carnival and Statia Day. For the holiday to be officially recognized the national government would have to approve it, he said.

DP Councilwoman Adelka Spanner asked what happened to Antillean Day, as it was promised that this day would be renamed Kingdom Day. She also brought attention to the fact that this agenda point was sent to the national Government three times already for approval without receiving any answer.

The agenda point was passed 4-1, with Merkman, Van Putten, Leerdam and Sneek voting in favour. Spanner voted against as she said she did not have the motion in front her.

The entire Council unanimously agreed with the proposal, but once again the issue emerged that the Island Government cannot appoint national holidays without approval by the national Government. Therefore, the proposal will be sent to The Hague.