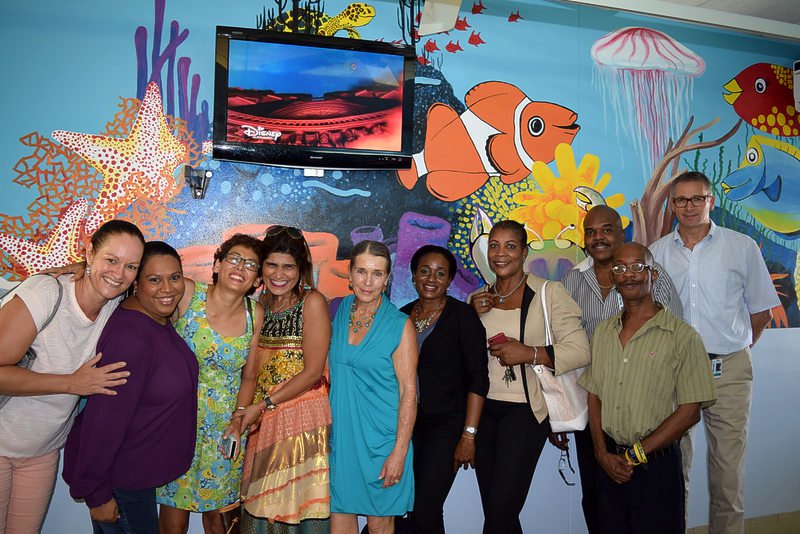 CAY HILL–A sick child is not a happy one and it’s worse for a child who is confined to a hospital bed away for everything familiar and comforting. Island Gems Charity Foundation brainstormed for a way to help St. Maarten Medical Center (SMMC) with a lasting and healing project, and settled on the painting of six murals in the children’s ward.

The cheerful paintings were created by Albert Arrindell, a talented artist and client of Sister Basilia Centre. Arrindell skillfully painted the mural in the general children’s ward and in the children’s isolation rooms under the guidance of Annemiek van Kerkhof-Posthuma of Sister Basilia Centre.
The project paid keen attention on health and safety standards and took into consideration scenes that would delight children – underwater fun and animals.
When Island Gems visited SMMC to see the completed work, which took about half a year to complete, they met a little girl from Saba in one of the rooms. Asked how she felt in the room with the underwater “Finding Nemo-esque” feel, she said the painting made her feel “happy and better already.”
The mural project was one item on SMMC’s extensive wish list. This project fitted perfectly in the goals of the all-woman Island Gems group. It was a project with long-term impact and will benefit any child who is admitted to the hospital.
The project also added a connecting element for Island Gems by bringing together Arrindell of Sister Basilia Centre and SMMC – both institutions the Foundation has assisted in the past. Arrindell was paid for his creativity and time working on the murals.
SMMC already had the mural project in mind when Island Gems, the oldest charity on the island, approached the institution to see what assistance could be rendered. The choice of working with Arrindell was already planned in for the murals project, and the project quickly gained Island Gems approval.
Island Gems President Alita Singh said, “The murals project hit a number of high points for Island Gems. We saw that it would help children in the hospital feel a little better, make the rooms less intimidating and more fun. The project also gave a St. Maarten artist an avenue for this talent and skill. We are proud to have been the integral link between SMMC and Albert via Sister Basilia Centre.”
SMMC Director Kees Klarenbeek said, “The donations made by individuals and organizations go a long way towards patient care. On the pediatric ward, we have quite some needs, and on our wish list for a long time was the wall murals. Sometimes our walls can seem cold and unattractive for children. This gift by Islands Gems allows us to bring healing to our youngest patients in an uplifting environment.”
Island Gems raises money for projects such as the murals project at its annual costume gala, which serves as its only fundraiser each year. The 2016 gala, themed “… Africa!” was recently held in Captain Oliver’s restaurant, and patrons not only buy tickets and bid on auction items, but pledge cash donations. Proceeds from the event will be used for projects like the murals.
Island Gems funds projects on both sides of the island are submitted by legally registered foundations and associations. No cash is given; projects and/or equipment are directly paid for by Island Gems. All projects are judged on effectiveness and long-term community impact.
To learn more about Island Gems, contact any member or visit the Foundation’s Facebook page: “Island Gems Charity Foundation.”