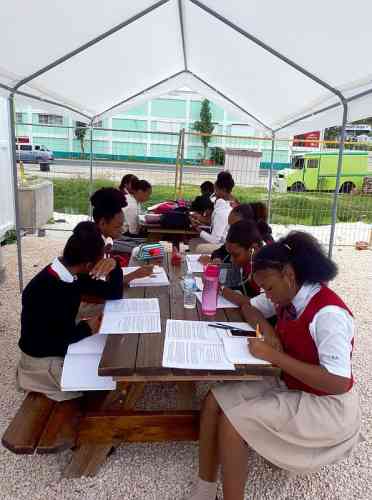 RING ROAD–Hot sun and the glare from the sand of the ring road were among the challenges faced by Charlotte Brookson Academy for the Performing Arts, housed in a pavilion tent since Hurricane Irma damaged the school’s temporary home in the old Government Administration Building.

Learning about the need for a covered outdoor area from a parent, Island Gems Charity Foundation sprang into action to provide tents to put over the picnic benches already in the school’s limited yard space. Four tents were purchased by the all-women foundation along with a large refrigerator and garbage bins.

Two of the tents were immediately erected and put to use by students as gathering spaces and a place to eat lunch or a snack. This past week, the tent was also used as an auxiliary classroom, an occurrence that was very much welcomed by Island Gems, the oldest charity on the island.

“It was very emotional for me when I saw the picture from CBA Director Claudette Labega of students with books opened under the tent. When we agreed to purchase the tents, our thoughts were only about giving shelter from the sun and a place for students to spend time with each other,” said Island Gems President Alita Singh.

“No empty classroom in the big tent due to mock exams? Ms. Williams teaches English under the little tent. Our children will learn and we will teach no matter what! How can I help but love CBA?? Thanks to Island Gem Charity Foundation for the little tent,” Labega wrote in her Facebook post.

To see the direct impact on education and the role something so small is playing in the lives of the country’s leaders in training are exactly why Island Gems has stuck to its core principle of funding projects for long-term impact, Singh said.

Island Gems board member Jody Rosen had visited the school to assess the needs of the school before the items were purchased. She is also elated when she sees the tents in such use. “It is such a good feeling when children are taken care of.”

Island Gems raises funds annually to support projects and programmes on both sides of the island at a costume gala. No gala will be held in 2018 due to the impact of Hurricane Irma. The foundation is using the remaining funds from 2017 to assist with as many social, educational and community projects as possible.

Registered foundations and associations of the Dutch- or French side can apply to Island Gems for consideration for funding. For more information, contact any Island Gems member or via Facebook.com/IslandGemsCharity.