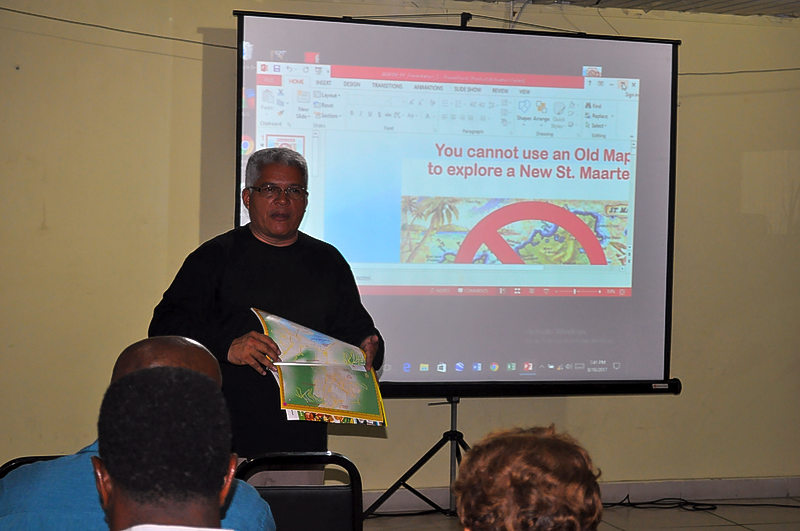 PHILIPSBURG–The second edition of Where’s Where in St. Maarten was released to the public in an official launch held at Philipsburg Jubilee Library on Friday, August 18.

The first copies of the magazine were presented to Library Director Monique Alberts and Assistant Circulation Supervisor Daniel Helligar.

To highlight the community aspect of the magazine, several community leaders spoke at the event, such as former Minister of Education and Culture and linguist Rhoda Arrindell, Executive Director of Safe Haven Cassandra Richardson, and Vice President of the Board of University of St. Maarten Pastor Wycliffe Smith, who all related how important community connections are and how evident these are in the magazine.

Keynote speaker and publisher of Where’s Where in St. Maarten Robert Espitia described his “labour of love” and explained how best to use the maps and list of street names to find any location fast and easy.

Armed with a deep understanding of the community of St. Maarten and its important places, Espitia, who first arrived on the island 43 years ago, emphasized that the second edition was aimed at empowering the locals of St. Maarten with valuable information and helping newcomers navigate throughout the island.

The illustrated magazine contains full-colour area maps with more than 140 important locations and monuments marked in the publication.

Several magazine advertisers were among the gathered audience, as both young and old flipped through the pages finding familiar places and new important places they did not know existed.

Where’s Were in St. Maarten magazine is being distributed free of charge. Advertisers received their copies first and schools will get copies as well. Apart from the many magazines given out during the launch, an additional 250 copies were given to the Library this week, with more being made available when needed.

Other distribution points include telecommunications company TELEM, Windward Islands Bank, Visser Pharmacies and other hotspots that have also received hundreds of copies.