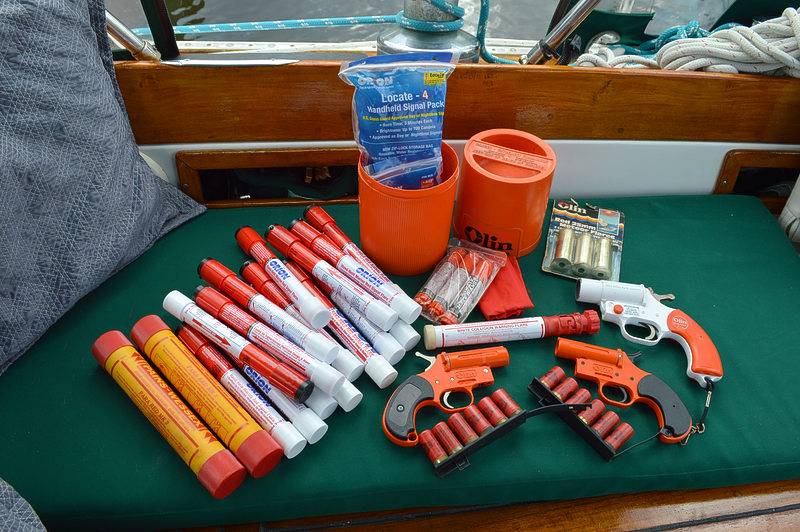 MARIGOT–French side-based Maritime School of the West Indies (MSWI), among other stakeholders, has raised concerns that St. Maarten/St. Martin, a thriving and popular yachting destination for many years now, still has no safe, organised method for the collection and disposal of expired distress flares, calling the situation “scandalous.”

“Many marine-related facilities, the marinas, sea rescue services and boat yards on both sides of the island, are constantly inundated with expired flares from owners of cruising boats, yachts and mega yachts, that don’t know where to dispose of them,” disclosed Jan Roosens from MSWI. “People even drop them in regular garbage bins which is extremely dangerous if they explode.

“With nowhere to put them, they are dumped in front of our school or other places; then we have the problem of trying to dispose of them. Governments must do something about it, or at least inform boat owners where they can dispose of them safely. It’s a scandalous situation for an island that is so big on yachting.”

Distress flares generally come in three types; red handheld, smoke (handheld or water buoyant), and parachute, or variations thereof. As website safety-marine.co.uk points out: “Once a distress flare has passed its expiry date, the chemical compounds inside will begin to degrade. The problem with this degradation is that you will never know to what degree the compounds inside have deteriorated, and as a result the way it behaves when it is ignited will be totally unpredictable.”

Former Dutch-side Fire Department Chief Frans Niewenhoven said some years ago expired flares were destroyed in an incinerator, but that practice was stopped and the Fire Department no longer accepts them.

“It simply was not the proper way to dispose of them,” Niewenhoven admitted.

Budget Marine’s managing partner Robbie Ferron noted that disposing of industry- standard red handheld flares will soon no longer be a problem with the introduction of new electronic flares, or Electronic Visual Distress Signal (eVDS), that generate no heat, no flames and have no explosive compounds.

The problem is certainly not new. One Dutch-side marina has been disposing of expired flares by soaking them in water to neutralise the gunpowder then burying them deep underground. But the question is: Is the method approved and controlled, and importantly is it environmentally safe other than being a convenient service for yachtsmen? Some vessels get rid of their expired flares by firing them off during a fireworks display such as on New Year’s Eve.

President of the St. Maarten Marine Trades Association Brian Deher acknowledged the problem is an ongoing one on the Dutch side, as well as the French side, affecting cruising boats and live-aboard cruisers more than the mega or super yachts, as the latter vessels in some cases keep their expired flares on board until they get to a US or European port to dispose of them.

The Daily Herald approached the respective government authorities to ascertain what is being done to find a solution. Section Head of Maritime Affairs Claudius Carty said he is very aware of the problem. “We are currently putting a lot of effort into finding a solution,” said Carty. “We hope to have something in place by the end of the year. One of the possibilities is to find an international partner we can work with, and have a Memorandum of Understanding (MOU).”

Asked if he could see a joint collaboration with the French side on this question, he said his department has reached out to the French authorities, but has not received any feedback so far.

On the French side, the Préfecture used to arrange for bomb disposal experts (demineurs) to come from Guadeloupe once or twice a year to St. Martin to collect and destroy expired flares, but this has also stopped since modifications to the Environmental Code to address pollution were made.

The last destruction of flares by the “demineurs” occurred two years ago in St. Martin. Just recently an unexploded World War II bomb was found on a beach in St. Barths, and the bomb disposal experts were summoned. The Préfecture attempted to seize the opportunity, asking them to come to St. Martin to destroy expired flares here, but the request was denied.

“They (demineurs – Ed.) are now only authorised to intervene if it is a question of public safety, in other words, if expired flares were found next to an apartment block or where the public might be in danger,” said a spokesperson of the relevant department of the Préfecture, speaking on condition of anonymity. “Theoretically, boat owners have to return their expired flares to the seller, because the French State gives each seller a nine-euro donation figured into the price to make the seller responsible for the destruction of expired flares.”

It was understood from the Préfecture that in France expired flares are taken to special facilities where they are destroyed in a controlled manner to prevent any pollution, and recycled. The problem still remains, however, with storage of expired flares, and their transportation, whether it is in France or in the Caribbean, because of the danger involved.

“Nobody is keen to do transportation because it is very dangerous,” the spokesperson added. “It requires a reinforced container especially for the purpose, and basically a bomb-proof truck to transport it to the disposal facility.”

The Collectivité has reportedly purchased such a container, however, no confirmation of this could be obtained from the Department of Risk Management. Input could not immediately be obtained due to the change of government in St. Martin. Civil servants from all departments have been asked to refrain from communicating until elected officials are nominated to departments on April 25.

The Préfecture did give assurance, as did Maritime Affairs on the Dutch side, that the subject is being addressed and they are working on finding a solution.