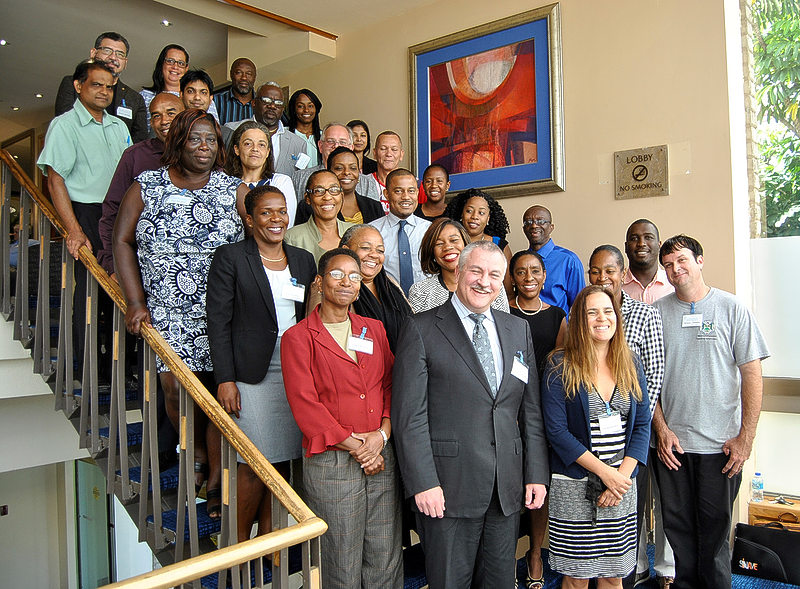 Regional participants at the Surveillance and Vector Control Working Groups of the Caribbean Vector-Borne Diseases Network CariVecNet meeting in Trinidad and Tobago.

The Caribbean Public Health Agency CarPHA, as coordinator of the Network, hosted 20 experts in vector control and vector-borne disease surveillance from 10 CarPHA member states. Vector-borne diseases have become very prominent within the Caribbean basin. Dengue has been around for years and chikungunya was introduced in 2013 followed by Zika.

The St. Maarten representatives were Maria Henry and Gerald Davelaar, Collective Prevention Services (CPS), a department within the Ministry of Public Health, Social Development and Labour VSA. They said they were very pleased with this approach and look forward to receiving additional information on the way forward.

Delegates discussed the formation and operations of the network and drafted a two-year work plan for both working groups.The network will act as an avenue for exchange of surveillance information on the circulating vector-borne diseases and collaboration on vector control and research topics such as insecticide resistance and community-based intervention.

A Caribbean Vector WhatsApp discussion group was created and implemented where all the participants at that workshop can communicate and discuss issues surrounding vectors and their related developments.It is anticipated that the discussion group will expand with additional colleagues from the region.

Also coming out of the meeting is the first task under the objective of standardisation: a review of the CarPHA-drafted Ovi-trap guidelines once all participants have reviewed the guidelines and returned their comments to the project coordinator. These comments will be submitted to CarPHA by the chairperson of the group Teresa Leslie, from St. Eustatius.

CPS reminds the community that there are two sure ways of mitigating mosquito-borne diseases: removing mosquito breeding sites from within and surrounding your premises and applying mosquito repellent to stop mosquitoes from feeding.