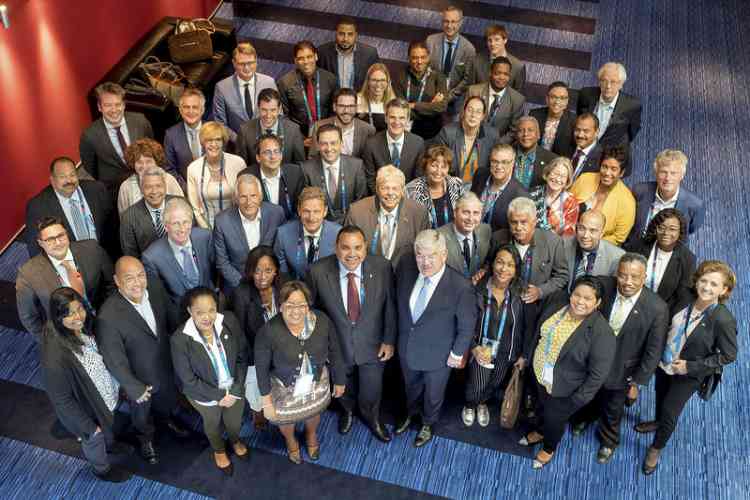 MAASTRICHT–Bonaire, St. Eustatius and Saba attended the annual congress of the Association of Dutch Municipalities VNG in Maastricht earlier this week.

On Tuesday, Saba Island Governor Jonathan Johnson gave a presentation about the crisis and disaster management plan of the Saba government, a plan that has received much praise for the way it has been implemented during and after Hurricanes Irma and Maria in September last year.

During the session, which was attended by representatives of the Caribbean Netherlands and the VNG, it was agreed that it was important to bring together contacts with the Caribbean part of the Kingdom and to share know-how.

The islands’ representatives engaged in talks with Dutch mayors who were personally involved with the Dutch Caribbean or through their municipality. Also present was VNG Chairman and Mayor of Utrecht Jan van Zanen and officials of the Ministry of Home Affairs and Kingdom Relations BZK.

The VNG has been actively involved with the islands for many years and has provided assistance not only in the past, but also at this time. St. Maarten is one such example where VNG International is assisting the local government with the updating of the disaster plans and the emergency operations structure after Hurricane Irma.

Bonaire, St. Eustatius, Saba, Aruba and Curaçao are members of the VNG since the break-up of the Netherlands Antilles. “The VNG also has members on the other side of the ocean that we hold dear and for which we want to make an effort,” said Van Zanen. St. Maarten is not a member, but the VNG does provide assistance there.

There was also a delegation of the Bonaire Island Council, as well as Island Governor Edison Rijna. Aruba Minister Plenipotentiary Guillfred Besaril said that his country was very much interested in closer cooperation with the VNG in the areas of social affairs and innovation.

December 3, 2020
0
A forensic investigator taking photographs of the vehicle in which the lifeless body of Juancho Raymond Cannegieter was found on August 8, 2018. (File photo) PHILIPSBURG--The Court of Appeals on Thursday confirmed the verdict of the Court of First Instance...
Read more