Home Local News Islands sign an historic justice accord with US 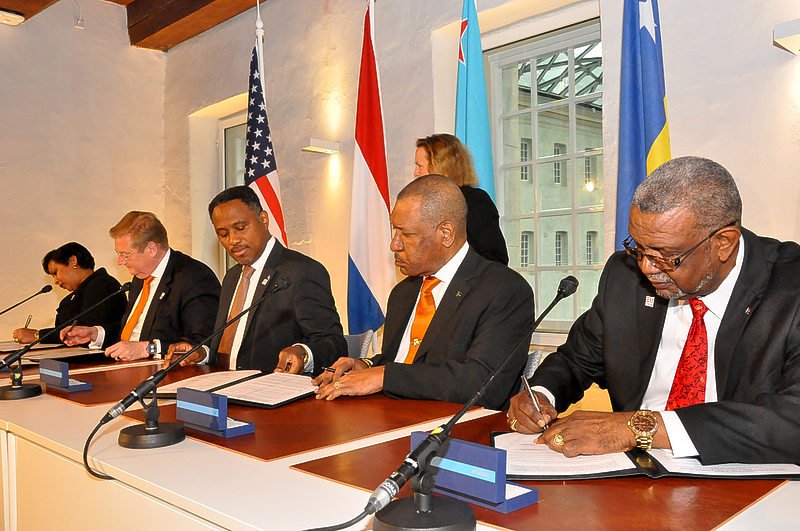 AMSTERDAM–“An important step forward.” That is how Dutch Minister of Security and Justice Ard van der Steur described Thursday’s signing of a Memorandum of Understanding (MoU) between the United States (US), the Netherlands, Aruba, Curaçao and St. Maarten in Amsterdam.

The enhancement of existing cooperation and strengthening of law enforcement and the criminal justice system in the Caribbean parts of the Dutch Kingdom through an MoU signed by US Attorney General Loretta Lynch, Minister Van der Steur and Ministers of Justice Arthur Dowers of Aruba, Nelson Navarro of Curaçao and Edson Kirindongo of St. Maarten was deemed historic because it is the first time that such a formal agreement has been signed for the Dutch Caribbean.
The MoU formalises the cooperation that already exists between the five countries in the areas of law enforcement and the criminal justice system. The countries intend to maximise their cooperation n the joint fight against transnational organised and major crime and terrorism and in the promotion of the rule of law in the Caribbean region.
“We are facing a joint fight against organised, transnational crime and terrorism. This MoU will increase the effectiveness of the police, prosecution and judicial services and will benefit everyone. We are in this together,” said Van der Steur in a short statement preceding the signing ceremony at the Amsterdam Maritime Museum.
Strengthening of law enforcement and the criminal justice system will structurally facilitate an increased effort to fight transnational organised and major crime and terrorism. “I am delighted that the participants will embark on these activities in close cooperation,” said Van der Steur, who was the only speaker at the ceremony.
The objective of the MoU is to stimulate joint activities; enhance sharing of information in the area of criminal investigation, upholding public order and security; and strengthen mutual cooperation in the areas of forensics and the organisation of the criminal justice system. These efforts extend to Aruba, Curaçao, St. Maarten and the Caribbean Netherlands islands Bonaire, St. Eustatius and Saba.
According to St. Maarten Minister Kirindongo, the MoU has an important added value because it creates possibilities to increase the already existing cooperation. The islands already had a good cooperation with the US, but it was never formalised. “It was partly dependent on the good relations of the involved persons with US authorities,” he said.
“We still have to give content to that enhanced cooperation which is aimed at sharing information and support in the form of material and additional education for those working in the law enforcement sector,” he told The Daily Herald after the signing.
Kirindongo explained that, for example, during an investigation St. Maarten authorities could make use of US ballistic and forensic expertise and in the area of DNA. “The US has certain advanced expertise and it is closer to home for us,” he said.
The St. Maarten Police Force KPSM has already made use of training possibilities in the US, including the training for the emergency dispatch room and the community police officers. He stressed that the MoU would not affect the existing system of requesting legal assistance (“rechtshulpverzoeken”).
Aruba Justice Minister Dowers said the advantage was that the Dutch Caribbean countries could now also participate in courses the US organises for personnel of prisons, police, detective departments, Immigration and Customs. “The US organises these courses for the Caribbean Community Caricom countries, but we could not participate because we were considered part of the Dutch Kingdom.”
Curaçao Justice Minister Navarro said he was very happy with the MoU. “We can now make a fist together against organised crime,” he said.
All three Dutch Caribbean Ministers praised the manner in which their countries had been involved in the realisation of the MoU, as a result of which their needs and interests were actually taken into account.

Source: Daily Herald
Islands sign an historic justice accord with US