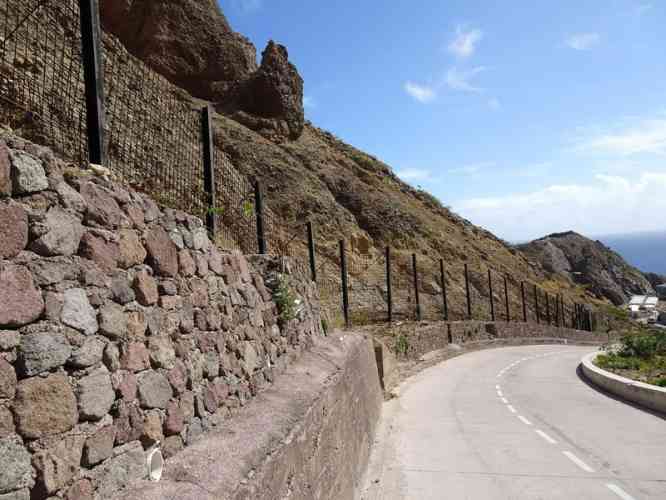 SABA–The issue of falling rocks as a result of erosion, in particular at Fort Bay Road, has the attention of Commissioner of Public Works and Infrastructure Bruce Zagers. Considering the importance of Fort Bay Road for the accessibility of the harbour, Zagers said on Monday that an expert will be brought in to advise on what is possible to help alleviate the erosion problem in the areas where rocks have been recently sliding from the hill.

The Commissioner stated this after the incident on Saturday night when two large rocks came down and landed on Fort Bay Road. Fortunately, no one was hurt, but it presented some inconvenience for visitors who were at a party down at the harbour. Transportation was arranged for the stranded people and an excavator was brought in to clear the boulders. Operations at the harbour were back to normal on Sunday morning.

Zagers explained that there is always a risk of rocks coming down with Saba’s steep hills and the ever-present erosion. “It can always happen anywhere, and not just on the road leading to the harbour. It is unfortunate that it happened, and thankfully no one was injured, but rocks will come down from time to time on an island with steep hills like Saba.”

Government is fully aware of the need for a secondary access road for the harbour. “We have been looking into this. In fact, I think that this should be the next major infrastructural project for Saba,” said Zagers, who explained that a road is not built overnight and that it takes years to prepare such an extensive project, which also involves private landowners.

In the meantime, the multi-million dollar harbour expansion project will continue. Cancelling this project in favour of constructing a secondary access road for the harbour, as has been suggested, is not going to happen, Zagers made clear.