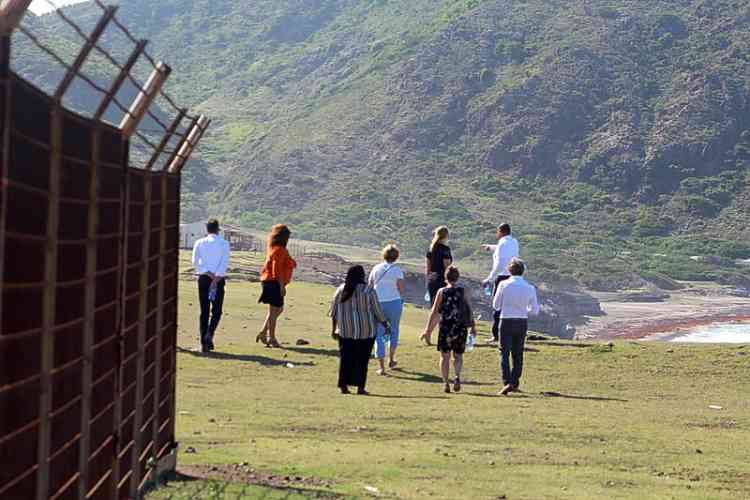 Government Commissioner Marcolino “Mike” Franco points out erosion and other issues along the opposite side of the airport fence in St. Eustatius to Minister of Agriculture, Nature and Food Quality Carola Schouten, her delegation and other officials. Story on page .

ST. EUSTATIUS–The challenges threatening nature and Statians and possible solutions were discussed during a meeting between Dutch Minister of Agriculture, Nature and Food Quality Carola Schouten and representatives of the St. Eustatius National Parks Foundation STENAPA.

Some of the main issues raised were erosion and sedimentation, eutrophication, pollution and structural lack of capacity. The specific concerns raised include when there is release of high sedimentation in runoff during heavy rains, either bury corals or blot out the sun, causing stress for the entire coral reefs, the lack of a tree ordinance that protects the trees already existing on the island, while effort is being put into reforesting the island to increase hurricane resilience and the lack of spatial zonation in the marine park.

Also raised were the need to include other areas in the water catchment project over time and the pressure that roaming animals (owned and unowned) have on several of these projects, on erosion and the overall health, biodiversity and resilience of nature in Statia.

The effects of eutrophication and pollution will see an increase in nutrition stimulate growth on reefs, increasing the competition for corals, as well as the probability and occurrence of coral disease. Graphs on the spatial distribution of sensitive Coral species around the island as well as hard coral cover and macroalgae cove was displayed at the meeting.

Some of the solutions to the problems put forward include replacement of all the cesspits and overflow septic tanks where no release of untreated sewage both terrestrial and marine would be possible as well as providing alternatives for businesses, local residents and marine traffic.

Other solutions proposed were having legislation and regulation for water management, sewage and pollutants, which would cover businesses (sewage oil, fuel and chemicals), maritime sources (ballast, hull cleaning and sewage), as well as spatial zoning and planning to the deal with runoff from coastal development and also regulate the removal of vegetation. The island is currently at a crossroad with two options that it can take. The first option, Berkel said is to continue with business as usual where the further decline of the coastal environment and terrestrial environment will continue where coral cover, fish abundance, deforestation and loss of land would continue. This option would also see the collapse of the coastal fishery section and the dive tourism industry, which is completely dependent on healthy reefs, as well as the rippling negative effects on hotels, restaurants, car rental services and other businesses which are also highly dependent on healthy reefs and also a decrease in tax revenue.

The second option presented showed a large-scale effort to a reverse current trend and improve the situation which would require additional capacity and funding. The second option would see improved health of the marine environment with an increased coral and an abundance of species of sharks, fish, lobsters and other sea life as well as substantial coastal fisheries and an increase in dive tourism. The option would also give the island the ability to market itself as a green destination with a healthy marine environment, rippling positive effects on the island’s business industry as well as an increase in tax revenue.

The discussion focused on the need to find a long-term working solution to remove roaming animals while other necessary projects are rolled out. Schouten gave her commitment to STENAPA and government to work together to find solutions for the island. Berkel invited Schouten to send a representative to the upcoming Financial Sustainability Workshop in November, to discuss the financial future of STENAPA. They need to increase the capacity to carry out the large amount of projects that are necessary to manage Statia’s nature.