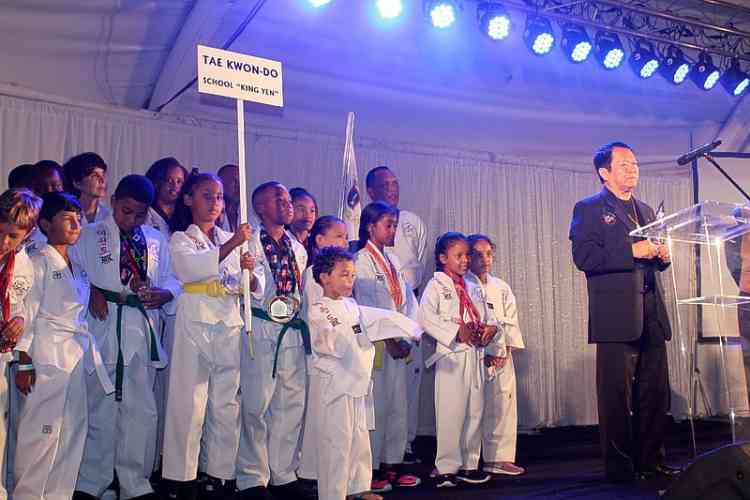 COLE BAY–Ivan Bell and Maudienne Profas were named Male and Female Athletes of the Year for outstanding achievements in Judo and Bodybuilding respectively at the close of the third Brown Pelican Sports Awards in Princess Port de Plaisance Resort on Sunday evening.

Bell triumphed over Omar Marsham and Mark Maidwell in the short list as did Profas against female nominees Tiwona Trotman and Jeanel Landifort.

Profas achieved her International Federation of Body Building (IFBB) elite pro status at the Giovanni Arends Classic competition in Aruba this year. She said she is the first female IFBB Elite Pro in St. Maarten, one of a select group of five pros on the island.

Cyclist Mark Maidwell was named Sporting Icon, receiving his award from presenter Mervin Beauperthuy. Elmora Aventurin and Garth Steyn were the other nominees.

Maidwell said he had some regrets about starting cycling later in life. “That’s why it’s very important for clubs and associations to train kids at a young age so they can become competitive later,” he said in his acceptance remarks.

The International Ambassador Award went to Burton Theodora of the St. Maarten Sports and Olympic Federation. He received the award from singer Kenyo Baly. Other nominees were Dean Hodge (cycling) and Ben Jelic (sailing).

The Young Ambassador of the Year award went to Kimani Olivacci.

Undoubtedly the most crowd-pleasing moment of the evening was Best Overall Team which went to King Yen Tae Kwon-Do School. King Yen was up against the national kick-boxing team and the national men’s senior volleyball team.

“We have been mentioned best international team many times abroad,” reminded Theo Liu, who was accompanied on stage by all his young and older athletes. “The kids here are the future. But we have to educate them in missing values such as honesty and discipline. We also train on the mental part so they can do well in school. Winning is about being very good at school as well.”

Liu thanked former Minister of Education, Culture, Youth and Sports Silveria Jacobs in the audience for her support of the school.

The theme of the Brown Pelican Awards this year was boxing and no less than five legends in the sport were honoured: Ivan “Fancy Boy” Lake, Daniel “Chopotin” Thewet, Blair Forde, Winston “Killa” Roumou and Jacinth “Jas” Bryan Labega.

A proud Erno Labega gave a full account of Jas Labega’s remarkable career in all facets of boxing, noting the turning points and particularly her founding of the World Boxing Organisation (WBO). He joked the only thing she did not do in boxing is actually get in the ring with her gloves on. Labega himself was given an honourable mention and award for his contribution to boxing.

A roll call of prominent boxers, living or passed on, from both sides of the island was read out and with so many names it was only possible to give them all an honourable mention. Not forgotten were the managers, trainers, seconds, referees, judges and ring announcers.

At the intermission a dance segment with a boxing theme was put on by National Institute of the Arts (NIA) choreographed by Clara Reyes. The dancers were trained in the boxing moves by Stephan and Earl Duzong.

The evening was emceed by Peter Gittens.