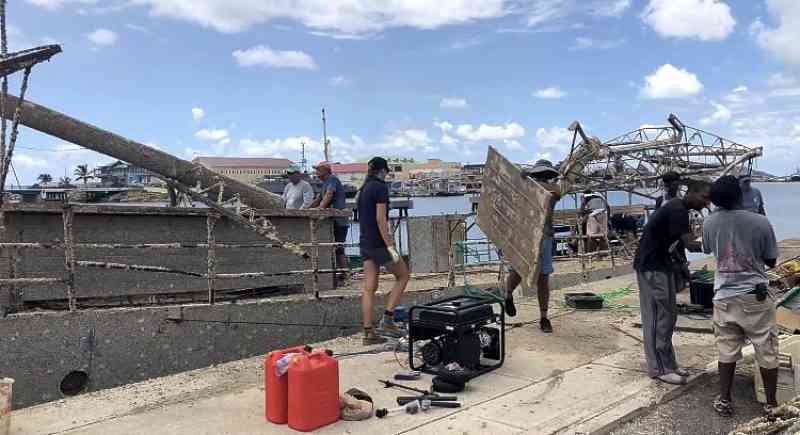 Volunteers aboard “JabJabs” before its sinking two kilometres outside of Simpson Bay on “The Bridge” dive site in 50 feet of water.

SIMPSON BAY–Once popular floating bar JabJabs has received a new lease on life as an artificial reef. JabJabs, an 85-foot steel sailing ship officially called SV Nightingale, sank in Hurricane Irma a year ago and was salvaged after being submerged in Simpson Bay Lagoon for three months.

The vessel was sunk some two kilometres outside of Simpson Bay on “The Bridge” dive site in 50 feet of water. Follow-up dives after the sinking found juvenile fish species already populating the area.

Since Irma, Nature Foundation has sought suitable vessels to create an artificial reef habitat. NAGICO Insurances contacted the foundation about donating the vessel for this purpose. It was very difficult to get the permits needed, but this hurdle was cleared eventually.

The sinking request was submitted to the Maritime Affairs Department and the Cabinet of Minister Stuart Johnson. “After a lengthy process we received permission … to sink the vessel as an artificial reef habitat,” said Nature Foundation Manager Tadzio Bervoets.

NAGICO is “very pleased” to see the project become a reality after so many months,” said Marketing Manager Lisa Brown. “We hope that by creating these artificial reefs, areas destroyed by natural disasters and other factors can be rehabilitated and at the same time contribute positively to the most significant pillar of our St. Maarten economy – tourism.”

After the vessel was salvaged the process was initiated to sink the ship as artificial reef habitat.

The Dutch Caribbean Coast Guard was at the location during the sinking of the vessel. Previous vessel owners Stefan and Daniel Veraguas and Kristen Mcallister were also part of the process and played a crucial role in stripping the vessel to ensure all environmental contaminants were removed.

“It was a bit nerve-wracking considering that we had a pressing time constraint with weather associated with Tropical Storm Isaac approaching, but through cooperation and very hard work by all those involved we made it a success,” said Bervoets.

The Foundation wants to sink more suitable, steel Irma wrecks after they have been thoroughly cleaned Government is urged to facilitate this process, which would provide a solution to the issue of wrecks still in the lagoon while creating suitable habitats for marine organisms and eco-tourism opportunities, said Bervoets.

Ships made of steel are often sunk as artificial reef habitats. Sunken ships that have been stripped and cleaned provide surface for coral and algae to grow on and attract numerous fish species. The area will also serve as an eco-tourism attraction, serving as a dive site for divers visiting the island.