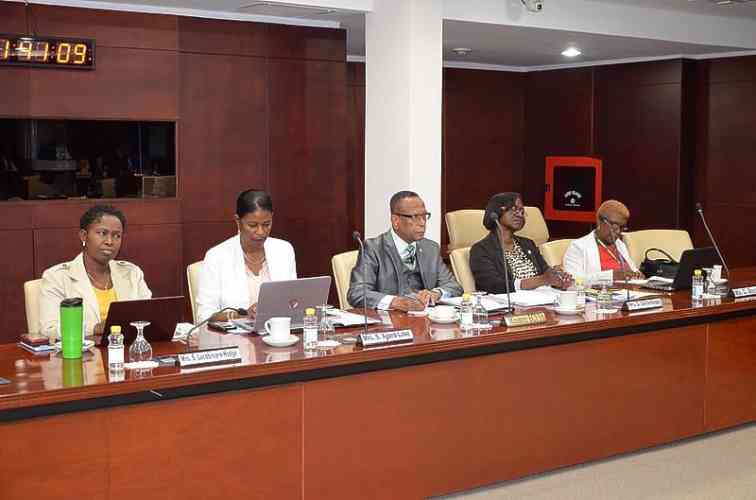 Education Minister Wycliffe Smith and members of his delegation in Parliament on Monday.

PHILIPSBURG–The apparent discontinuation of the Education Care Center (ECC) programme at the end of the last academic year, has the concern of National Alliance (NA) Member of Parliament (MP) Silveria Jacobs, who posed a number of questions on this issue to Education Minister Wycliffe Smith during a public plenary session of Parliament on Monday.

In giving a background of the ECC programme and how it came about, Jacobs said several years ago there had been many reports of an excessive number of suspensions in schools. After much discussion with the St. Maarten Student Support Services, it was decided to have a behaviour modification programme to help adjust the many negative behaviours amongst children that disrupted classes and to also help students themselves. Government at the time decided to invest funds to address this issue via the ECC.

She said it had taken several years from its inception as a thought to the actual programme being implemented. Hurricane Irma in 2017 “threw a wrench” into the project, which had to be carried out at the Charles Leopold Bell School in Cole Bay, which suffered immense damage during the hurricanes. The Division of Public Education and the St. Maarten Student Support Services Division were asked to come up with a solution and the programme began to some extent.

Jacobs said she was alarmed to learn that the programme had been discontinued at the end of the last school year and she asked the minister a number of questions as to why this was the case. Jacobs was the only MP to question the minister on this subject during the agenda point.

“If the ECC programme has been discontinued, what is the minister/ministry’s vision and action plan to deal with growing issues with students requiring behaviour modification training? Where has the staff been placed?” she asked during the meeting.

She also asked whether there had been a decrease in the number of students being recommended for suspension and/or expulsion during the last two academic years (2017-2018 and 2018-2019), whether the rate was higher at public schools, whether monthly meetings were held with school boards and whether these were ongoing; and what some of the main challenges brought forward by schools in general, were.

She also asked whether any plans of action had been brought forward and put in place to alleviate the challenges that exist. She quizzed the minister on what had been done over the past year and what was being done presently to deal with the ongoing challenges facing the management of the Department of Education, what the minister’s vision for the improvement of the perception of public education was, as well as the actual operations of the Department of Public Education in the short and long term.

The minister is expected to get back to Parliament on the answers in a week. He promised to provide to MPs some information such as the evaluation reports of the ECC programme, prior to this.

Jacobs was disappointed that the minister was not prepared to immediately answer any of the questions posed. The minister had begun by saying he had opted not to give a presentation at the start of the meeting, because during the last education meeting, MPs had wanted to ask their questions first.

September 22, 2021
0
CAY HILL:--- St. Maarten Medical Center (SMMC)’s the general contractor will be pouring the first section of the basement floor of the new St....