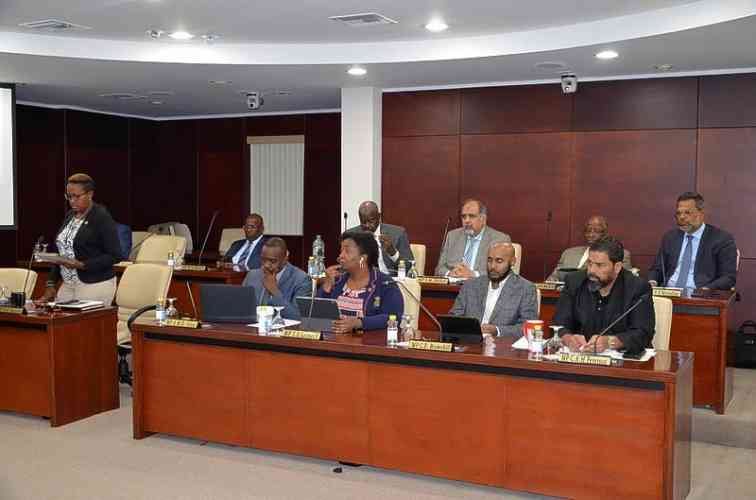 MP Silveria Jacobs (standing) posing her questions and raising her concerns during Monday’s meeting, while other MPs look on.

PHILIPSBURG–Concerns about the provision of special education and the state of disrepair of public schools since the passing of Hurricanes Irma and Maria were amongst areas in which Members of Parliament (MPs) questioned Education Minister Wycliffe Smith on, during an urgent public meeting of Parliament on Monday.

Only MPs Silveria Jacobs (National Alliance) and Frans Richardson (United St. Maarten) party questioned the Minister during the meeting, which was to address the state of affairs of education facilities and education in general. A second agenda point was the state of affairs of the Education Care Center (ECC), an initiative that began while Jacobs had been Education Minister (see related story).

Jacobs said with just several days before the second anniversary of the devastation faced by Hurricanes Irma and Maria in St. Maarten, the stories coming from schools, specifically public schools were not encouraging.

“Reportedly schools are in the same state of repair or disrepair since October 2017. Promises were made that repairs would be made during the just concluded summer of 2019, which has not occurred. Schools have therefore reopened with the same challenges faced upon closure in July. What is the reason for this and please explain what will be done to remedy this situation as soon as possible,” Jacobs asked.

She also asked the minister to provide a breakdown of the status of each public school and an overview of the subsidized schools as it relates to their facilities.

She quizzed the minister on the status of the St. Maarten Vocational Training School (SMVTS), whether overcrowding is still a problem, whether additional classrooms have been completed and when students and staff would be able to make use of the new classrooms. “I believe this is also overdue and was promised during last school year. The kitchen was also slated to be renovated, has this been done? Has the new equipment which was ordered since after the hurricane and on island for more than a year been put to use? What about the machinery for welding, automotive repair, etc. Are they being properly maintained, or are they in need of replacement as well?”

Jacobs alluded to statements made by the minister in a recent press release regarding changes to come in the curriculum of SMVTS and asked when these new classes are expected to start. She also asked whether staffers are equipped to adjust to the changes, whether the changes were brought forward by the school’s staff, a special committee or the Department of Education’s policy department.

“Please give an elucidation as to what the vision of Minister is pertaining to this school – will it be equipped as a secondary special education school in combination with a vocational school? Excuses continue to be given to schools that the administrative process is stagnating the repairs and maintenance issues at the public schools, can minister clarify what is the actual cause, and how the Minister/Division of Public Education is dealing with this?”

The MP alluded to recent reports circulating on social media and reports that she had also received concerning parents who feel forced to pay for private education for their special needs children. She asked whether Smith is aware of these cases.

“Have these cases all gone through the process to be admitted to PWAS? If not, why hasn’t that option been explored? Is it so that schools are reporting more and more special needs cases in their schools? Can schools opt to keep special needs education student and receive extra funding to cater to their needs in the regular setting? Is this being done currently with subsidised school boards? Does the Individualized Educational (IE) Programme at Catholic Schools fall under this type of education?”

Jacobs also touched on reports concerning high levels of sick leave within public schools and the letter sent to public school teachers to this effect as well the union’s response. She asked the minister to clarify the percentages reported.

“I have been informed that the Inspectorate lacks a … [national decree – Ed.] ‘landsbesluit’ in order to be able to execute its duties related to the supervisory role it should play where quality of education is concerned. What is the hold up on this respect? Has the Ministry made use of the technical assistance from the pool of consultants approved in the Budget 2019? If not, do you intend to?” Jacobs questioned.

At the end of the questioning Smith indicated that he would be prepared to answer by the end of this week or within a week. He said, however, that he can provide some reports to MPs prior to this time.