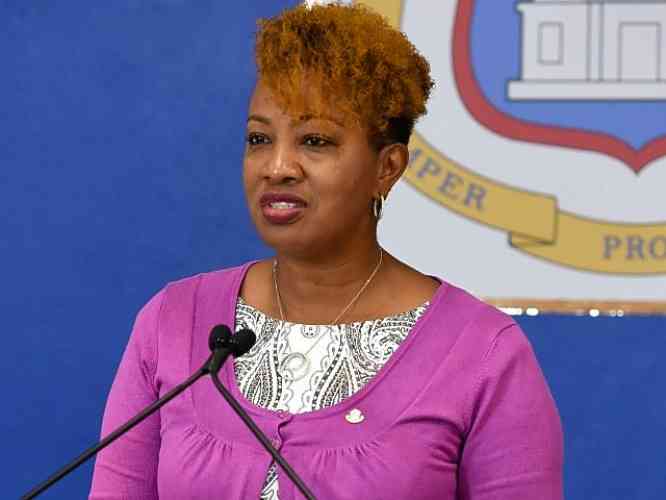 She made the plea during the continuation of a public plenary session of parliament held on Friday on the handling of sexual molestation cases that have been surfacing in the media.

Jacobs and fellow party member MP Jurendy Doran strongly expressed their position regarding the issue. Jacobs said this topic is “very near and dear” to her in her capacity as an educator and in her personal life. Jacobs has done extensive research with members of the Police Force and others in the legal field to secure as much data as possible regarding the current law(s) related to the subject.

Jacob said in a press release issued on Sunday that she was pleased that the matter is on the table and being discussed, as it is a serious matter severely affecting the community, not just in regard to living up to human rights, but also understanding the importance of protecting those who really need protecting in St. Maarten and the need to expand the laws to actually prosecute those who do wrong to others.

Jacobs said after reading the laws that it had become clear that the laws are very limited in their ability to penalise offenders, especially those whose sexual crimes are against children, females particularly. She believes the law should be amended to protect all genders and age groups.

She underscored the importance of updating the laws to protect persons in the workplace and the sports sector where, in the past, coaches have taken advantage of the trust of their students, etc. With the current law status, the penalties are far too low.

She stressed to the minister that this is something that must be addressed and amended to protect children and adults who are vulnerable.

Doran said this topic addresses a lot of “unspoken” activities that occur daily in the workplace where there is much abuse of power. He spoke of victims who are hesitant to come forward. He wants parliament and government to identify what laws need to be amended.

He spoke about a recent case in which a minister, believed to be Minister of Tourism Economic, Affairs, Transport and Telecommunications Stuart Johnson, had been accused of making sexual advances to a member of his staff. Doran said that although one is innocent until proven guilty, most often the victims feel like they complain and then the matter eventually just goes “dead” without any repercussions for perpetrator’s abusive behaviour. Doran also believes discrimination also plays a role in this matter.

After De Weever provided some answers to questions posed by MPs, Jacobs asked follow-up questions and asked for clarification of certain answers given by De Weever.

One of the issues on which she sought clarity was statements from the minister that molestation victims needed a witness. Jacobs asked the minister if the police would have the legal right to disregard the complaint in the event the victim does not have a witness. She said if indeed this is the law, this practice would then block many victims from “stepping forward.” Jacobs does not know whether the minister misspoke.

De Weever indicated that there is a year plan to tackle the pertinent issues surrounding this topic. Jacobs said she wants clarity on how that plan is being prioritised. She wanted a timeline to be shared and the plan of approach to be laid out so that parliament can also prioritise and be able to support the ministry accordingly.

Jacobs mentioned the drinking law amendment which she successfully had passed in Parliament in November 2018 that is still pending enactment by government. This is a major concern for her, as the initiative for “this pertinent law” regarding molestation taking the same long and drawn-out process is alarming.

Jacobs implores De Weever to work diligently to increase penalties and bring the necessary amendment of the articles of the penal code as soon as possible to include sexual harassment “to protect our people,” especially vulnerable persons, children, the elderly, special needs persons and other adults.

De Weever was accompanied in parliament by supporting staff from the Police Force.

The initial meeting on the subject was held on January 30 and reconvened on May 3.