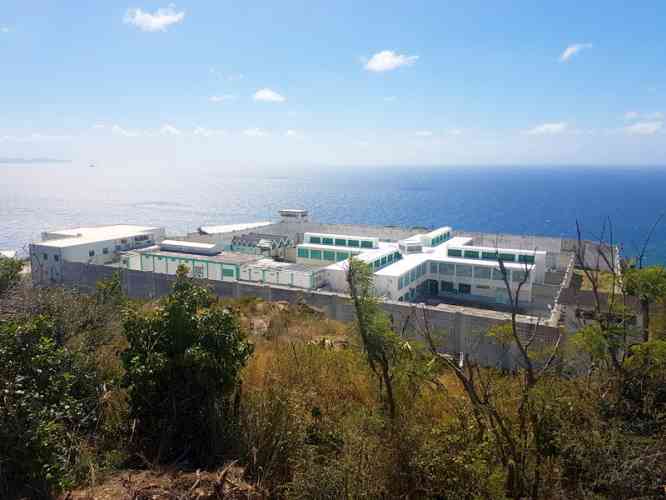 POINTE BLANCHE–It is clear that although circumstances may have improved marginally at the prison, which was already in a deplorable state pre-Hurricanes Irma and Maria, there is dire need for continued improvement, according to National Alliance (NA) Members of Parliament Silveria Jacobs and Egbert Doran.

The MPs’ statement follows their recent visit to the Pointe Blanche prison and the Philipsburg police station holding cells, the starting point of the tour. The visit was the culmination of some nine months of requests to Justice Minister Cornelius de Weever.

“There is a whole lot that needs to be done to improve the living and working conditions of the detainees and staff. Clear-cut procedures, needed personnel, upgraded/new facilities are indeed a must in the short, medium and long term,” said the MPs.

The planned container solution for housing prisoners during the pending reconstruction “must be properly analysed, and solutions to address personnel and material shortage must be proactive before further violence and other violations occur.”

While the prison director was in office at the time of the MPs’ tour, he “did not deem it fit to meet the visiting MPs nor apprise of his plans. This is considered very disrespectful to the elected MPs who were carrying out their duties in representing the people of St. Maarten,” said the MPs.

Reviewing the tours, the MPs said a section of the police cells had been renovated. Some eight cells in the older section are still unfit to be used due to plumbing issues which cause a stench. This made it clear to the visitors why detainees cannot be held there for extended periods of time.

The shortage of guards at the Philipsburg location concerned the MPs, who plan to seek further dialogue on remedying this. “It is clear that guards are executing a very necessary service in the justice chain and not under the best circumstances,” they said.

At the Pointe Blanche location, the MPs were shown most areas of the prison and were informed about the many challenges and why a new prison is necessary. Some facilities “appeared quite primitive, and, again, a shortage of personnel appears to be a major bottleneck.” The short training period for new prison guards is also a concern.

The facilities, including a classroom, library, canteen, sick bay, nurse and outdoor free space area, are available to prisoners at Pointe Blanche. However, the MPs said the classroom is underused and supplies are needed in various areas.

The MPs plan to write to De Weever about education and training opportunities and about the number of prisoners enrolled in classes offered to gauge their effectiveness, as prisoners have claimed that little or no classes are offered to them.

The two MPs said they “will continue to dialogue, write letters and request meetings to get direct answers from those in management and the minister to garner a better sense of the plans moving forward, what can be realistically achieved and in what timeframe.”