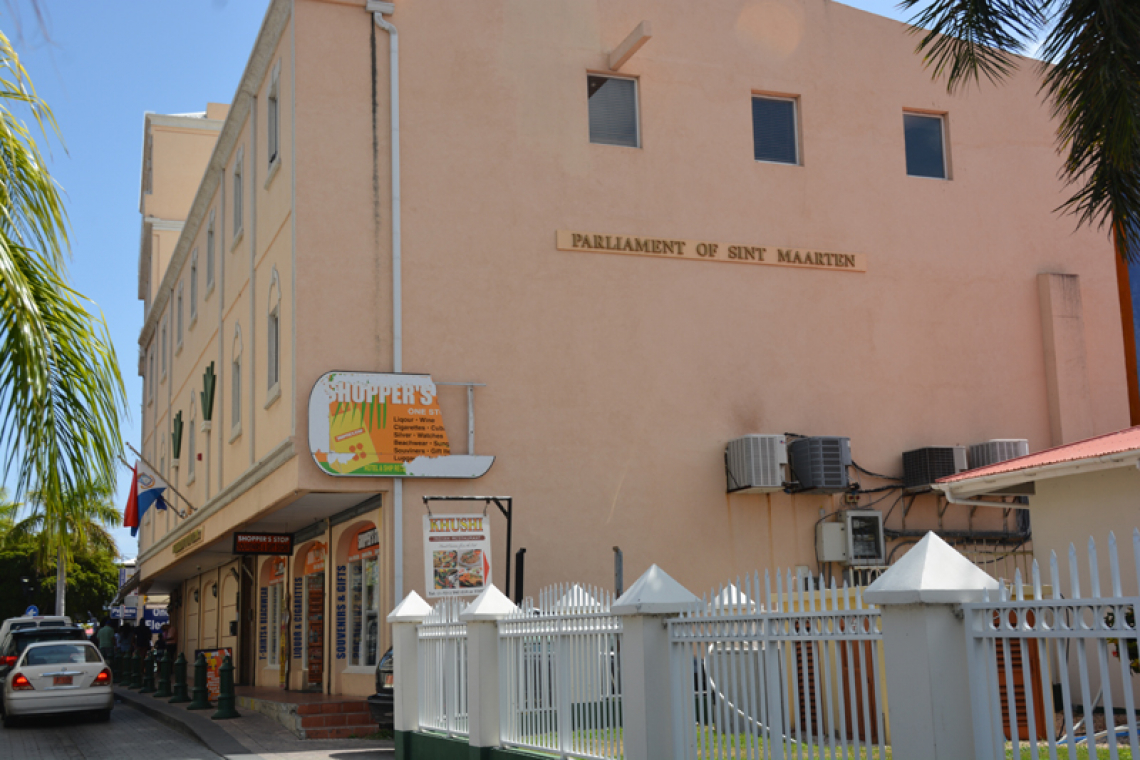 PHILIPSBURG–The total employment package of top-earners in government-owned companies and (semi-) public institutions will be capped at NAf. 39,519.73 per month under the Temporary National Ordinance on the standardisation of top incomes and adjustment of employment conditions at (semi-) public sector entities, Finance Minister Ardwell Irion told Members of Parliament (MPs) on Monday.

This draft legislation was the only draft National Ordinance debated during a meeting of Parliament’s Central Committee, which was slated to discuss four in total (see related story). Three of the draft National Ordinances were related to cost-cutting measures stipulated by the Dutch government as conditions for the second tranche of liquidity support. The Dutch government gave the green light for the second tranche in May 2020.

The draft National Ordinance that was discussed seeks to enforce two of the Dutch conditions. One of these has been dubbed the “Jacobs norm”, which stipulates that the total employment packages of top officials in government-owned companies and (semi-) public institutions cannot exceed 130 per cent of the Prime Minister’s reduced salary. As per another Dutch condition – which will be legislated in one of the other two cost-cutting draft National Ordinances – the total employment packages of political authorities must be reduced by 25 per cent.

The draft National Ordinance discussed on Monday will also reduce the total employment packages of workers in these entities by 12.5 per cent, which is also one of the several Dutch conditions.

According to Irion, the Jacobs norm figure was calculated by first taking the Prime Minister’s current total salary and allowances (NAf. 22,046.36) and adding it to the total non-monetary benefits and pension (NAf. 18,468.70). The sum of these numbers was then reduced by 25 per cent, after which 30 per cent was added to it, giving a total of a little more than NAf. 39,500.

In her presentation to MPs, Prime Minister Silveria Jacobs said the 130 per cent figure also applies to consultants’ hourly tariffs and will be regulated in a ministerial degree.

Under Article One of the draft National Ordinance, the (semi-) public sector is defined as either a legal entity established by or pursuant to a National Ordinance; an institution that is subsidised or funded directly for more than 50 per cent by country St. Maarten; or a company incorporated pursuant to Book Two of the Civil Code in which country St. Maarten directly or indirectly has shares of more than 50 per cent.

As for the cuts to employees, the draft National Ordinance allows for (semi-) public sector entities to implement the reductions in the manner regulated in draft National Ordinance COVID-19 cuts to employment conditions for civil servants, which is another of the cost-cutting laws. However, the entities are free to deviate as long as the cuts hit the 12.5 per cent target reduction, said Jacobs, adding that the legal minimum wage is the bare minimum for gross monthly salaries under the law.

The draft National Ordinance is to be retroactively dated to July 1, 2020, which was the deadline the Dutch government imposed for meeting the conditions.

The Advisory Council weighed in on an earlier version of the draft legislation and Jacobs shared some of these concerns with MPs. The council said that government had to consider part-time employees as well as those working at more than one (semi-) public entity. The council also had comments about how the draft National Ordinance would be enforced.

The draft National Ordinance was also initially tagged as a matter of urgent importance (in Dutch, “spoedeisend belang”). Legislation under this designation can bypass the Ombudsman’s six-week review. However, the Advisory Council cautioned against this move, and government started the process of removing the designation from the draft law last week.

Buncamper also asked how long the temporary National Ordinance will be in effect and who decides when the law will be lifted. “To prevent anybody holding this country hostage, this government needs to put a timeline to the law. You cannot have a temporary law that does not have a timeline in it. That is ludicrous,” he said.

Finally, Buncamper asked what happens to top-earners who have additional sources of income, such as a pension from another company.

United Democrats (UD) MP Sarah Wescot-Williams asked how government’s vision aligns with the three cost-cutting laws. She also questioned the rationale behind the figure of 130 per cent over a lesser figure, such as 115 or 100 per cent.

Wescot-Williams also asked which (semi-) public entities have already enforced a 12.5 per cent and which have not. “What will happen to companies that have not [yet enforced the cut – Ed.]?”

Independent MP Christophe Emmanuel firmly said that he does not support the cost-cutting draft National Ordinances. As one of many points of contention, Emmanuel was concerned about the “no indexation” clause in the draft legislation, which means that salaries would be frozen until further notice, all while the country’s cost-of-living is increasing annually.

The meeting was adjourned before the ministers answered the MPs’ questions. It is slated to resume at 11:00am today, Tuesday.