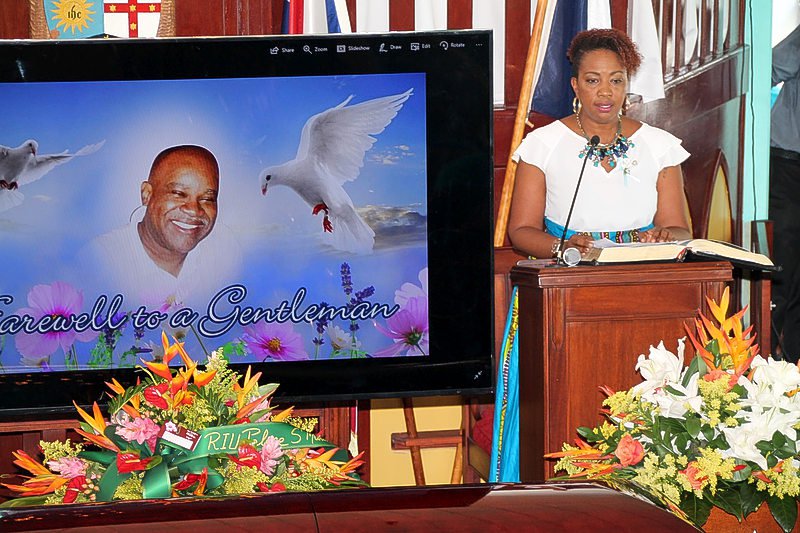 PHILIPSBURG–Minister of Culture Silveria Jacobs paid tribute to the late Culture Department head Neville York, who was laid to rest on Tuesday. She said in her address that York had been a cultural icon, accomplished musician, scholar, policy developer, heritage specialist, businessman, teacher and St. Maarten legend.

“Sweet Salt is about Neville York sharing the creative memory of the pan basin with us, thereby uniting us through the pan with the musical experiences surfacing from the depths of the Caribbean Pan Basin,” said local historian and former head of the Department of Culture and Youth Camille Baly.

York started in 1995 as a cultural worker in the Department of Culture and Youth under the leadership of Camille Baly, who served as his mentor for many years, sharing his humility, grace and soft-spoken authority with York. An avid student and a great example of a life-long learner, his enthusiasm for learning and sharing his knowledge and expertise was renowned within the Ministry, Government and the many local and international organisations to which he contributed.

“Having grown up in a musical family known for its pioneer role in the introduction of pan to St. Maarten, Neville was destined to be an accomplished musician. He followed his dream after high school, where he’d already received regional recognition with diplomas earned in Guadeloupe, to pursue his music degrees, among others.

“Last I checked he held Bachelor’s and Master’s [degrees – Ed.] in music, Bachelor’s in Spanish and Business Administration, and was working on a second Master’s in Business. He never stopped learning,” stated the Minister.

“Much can be learned from his voracious appetite to know more and continue to grow personally as well as influence the growth and development of culture here at home, in the Caribbean and around the world. In 1999, after the reorganisation of the department, Neville became the head of the Social and Cultural Development Department and from 2010 to present, due to constitutional change, he became the head of the Culture Department.”

Some of his achievements within the Ministry over the past few years: Cultural policy framework; Department Cultural Policy Plan 2015-2019 also called the Vision 2020 – Opening windows and building bridges on the Principles of Human Dignity under which the following achievements were being realised: Decade of revitalisation of our Natural and Cultural heritage 2013; led the creation of the Cultural Calendar 2013 – research on heroes and heroines of St. Maarten – to be republished as a book; guided the process toward the preservation of the island’s forts, salt factory, restoration of the Methodist Church, Brick Building, Pasanggrahan Hotel; organised the Caribbean Capacity Building workshops in 2014-2016; the Caribbean Small Island Development States meeting held in 2014 which began the process of World Heritage nomination.

York also spearheaded the coastal fortification which enabled St. Maarten, along with other Caribbean islands, to begin the process of getting coastal forts on the World Heritage list.

He was also in the process of establishing a talent development scholarship that enabled the youth of St. Maarten to further develop their skills in their chosen art forms.

He was instrumental in St. Maarten becoming co-signee to the United Nations Educational, Scientific and Cultural Organisation (UNESCO) Intangible Heritage Convention. He also established the Caribbean Pitch It Foundation to assist Government with the execution of its many cultural events.

York spearheaded the Steel Pan in Schools programme which began at Learning Unlimited Preparatory School and Methodist Agogic Centre (MAC) with Caribbean Pitch It and funds received from the “Fonds voor Cultuurparticipatie” in the Netherlands. He participated in the planning of various events and activities over the past 15 years such as the St. Maarten Day celebrations and labelling of monuments which should be finalised in 2017.

“Neville’s legacy will live on through his attitude, his research, his writings, his music, his teaching of children and adults, the lives he’s touched. His spirit will live on with every ping of the pan; every monument restored, labelled and recorded; every spoken and written word archived; every documentary filmed; every song composed, written, recorded and performed; every dance choreographed danced and video-graphed; every piece of art conceived, created, displayed and sold; every art facility restored, expanded and built,” said Jacobs.