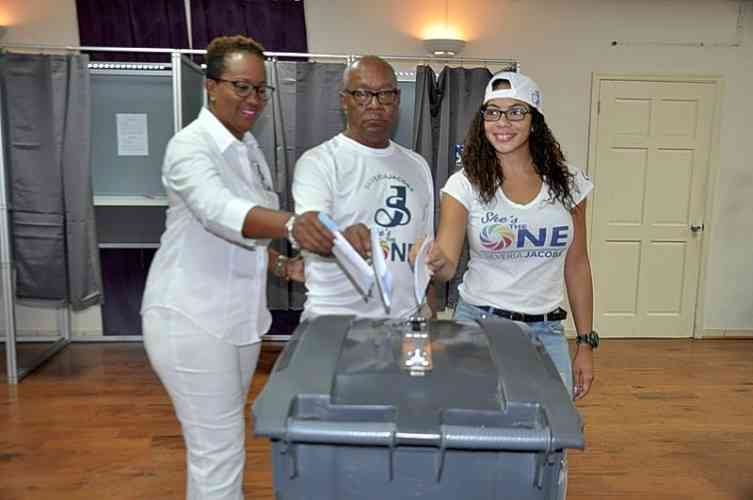 PHILIPSBURG–National Alliance (NA) leader Silveria Jacobs on Tuesday morning congratulated all the parties that secured seats in Friday’s snap parliamentary election, noting that based on the outcome, the people have chosen for another coalition government.

“Thank you and congratulations to the people of St. Maarten for going out to the polls and having your say. As a country we should be proud that we can have free and clear peaceful democratic elections,” Jacobs said in a brief press release on Tuesday morning.
“Once again the people have spoken and a coalition will have to be formed whether we like it or not. Congratulations are therefore also extended to the United Democrats, United St. Maarten (US) party and the St. Maarten Christian Party that have won seats based on the preliminary results of the Parliamentary elections held Monday, February 26.
“It is imperative that we allow the process to be followed and that an informateur is appointed before any agreements are made between parties. May God bless the people of St. Maarten and the government that will be formed in the interest of good governance, transparency and stability as we focus on rebuilding St. Maarten and its people.”
She had told The Daily Herald in an interview earlier in the evening that while NA had hoped, given the situation facing the country, to have secured something stable, the only way to secure stability, at this point, given how the electorate had voted, is for an informateur have real discussions and find common ground amongst the parties and move forward from there.
“I look forward to discussions in the terms of an informateur being appointed and that we will not rush towards any type of overnight agreements, based on the fact that again the people have chosen for a coalition government,” she said.
“No one has won outright and I believe that we should respect the people and not try to rush to grab the power. I have pledged to do this, I said it publicly and I hold to my word that I will await the informateur being appointed and I am willing to sit and discuss what’s the best way to move forward as a country because we are right now in a very precarious situation. … I believe that the people of St. Maarten come first and whether we like it or not, this is the way they have voted.”
Jacobs said she had sent out congratulatory messages to the various party leaders who secured seats in the election. “I must say that after first couple polling stations came in, I realised that the joining forces of UP [United People’s party – Ed.] and DP [Democratic Party – Ed.] bore fruit and they were able to maintain their numbers. We felt that the people would have … punished ship jumpers, etc., but it appears that they have held strong and I would like to congratulate all the parties for their success in the polls.”