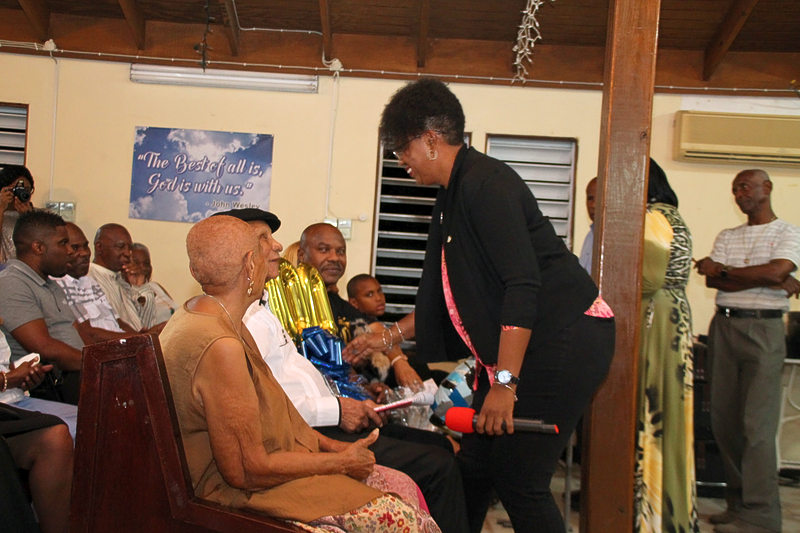 PHILIPSBURG–Minister of Education, Culture, Youth and Sport Silveria Jacobs says George “Freddy York” York is the “root of tangible and intangible cultural heritage in St. Maarten, which is evident in the music of the pan, calypso, musical talent, sound production, poetry, etc. of his offspring who share his genes.

York celebrated his 100th birthday on January 27, and an event was held in his honour.

She said York “is indeed a cultural pillar of St. Martin, as well as the community of Middle Region where he resides. He is the epitome of what it means to live a long and healthy life as the grandfather of many of our recognisable musical and artistic talents, including our very own Head of Department of Culture.”

“Our younger generation should use Mr. York as an example of what it means to live life to the fullest and continue on the path of being life-long learners,” Jacobs said. “Mr. York professed to be one who loved to take long walks, and get lots of rest. His sense of humour as recounted by his children and grandchildren also speaks of an attitude to enjoy life that he possesses.”

Jacobs said she is proud to have represented the Ministry and by extension St. Maarten in attending a special church service, as well as the reception in honour of York over the weekend.

In paying tribute to York, she challenged his family to record his stories so that his memory could go down in the annals of history for everyone in St. Maarten and abroad to benefit from. She also urged the family to continue to cherish every moment with York as “it is truly a blessing to achieve such a milestone as 100 years.”

SCDF gets green light for 2021 Carnival, no Jouvert morning, no jump ups | THE DAILY HERALD

January 15, 2021
0
~Can be cancelled if COVID situation worsens~PHILIPSBURG--The Council of Ministers is convinced that the agreed upon public health protocols to be implemented by the Sint Maarten Carnival Development Foundation (SCDF) will ensure public safety.   As such, SCDF has been...
Read more