Home Local News Jadnanansing leaves Parliament to focus on her passion: the youth 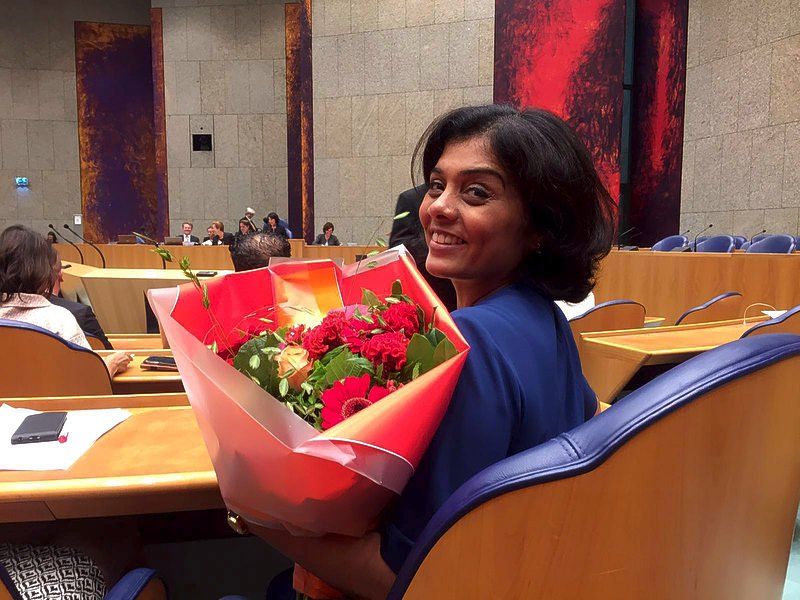 THE HAGUE–For more than six years Tanja Jadnanansing (49), who grew up in Suriname with Aruba roots, sat in the Second Chamber for the Labour Party PvdA. On Tuesday she said farewell. She is taking on a new challenge at the Albeda College in Rotterdam that totally fits her passion: working with and for youngsters.

Her mother in Aruba was a teacher, and the husband of her mother the director of a school in Aruba, so in that sense it is no strange move for Jadnanansing to leave politics and to entirely focus on a greater cause which is to help young people develop themselves.

Jadnanansing is a vocal person with a direct message and strong yet cheerful personality. “Charming and happy,” said Parliament President Khadija Arib in her farewell speech on Tuesday. Arib mentioned the fact that Jadnanansing had made the biggest jump on the PvdA slate in 2012. But in the summer of 2016, she made the decision to follow her heart and to leave the Second Chamber to fully focus on working for and with youngsters.

“It was a tough decision, because I am very loyal to my club,” said Jadnanansing, who said that she would remain a member of the PvdA, the party that she has been a member of for more than 20 years. “I am a social democratic in heart and soul. I believe in sharing things and making this world a better, more equal place for everyone.”

“The Security and Justice Committee took up a lot of my time. It was difficult to combine the two portfolios. Besides, I wanted to be outside, I want to be in touch with people, not cooped up inside,” she told The Daily Herald two days after her resignation as a Member of Parliament.

As spokesperson she tried to increase awareness for especially vocational education and the importance of ensuring sufficient, quality internships which are vital for these students and their future perspective. Jadnanansing wrote a position paper to address the shortage and quality of internships, and pushed to adapt legislation that would make it easier for employers to offer internships. She also made a strong case for career consultation and matching facilities for students.

While in Parliament, Jadnanansing always kept in close touch with students. She invited students every Wednesday for a meal and to talk about their studies and personal development in what she called “pizza session.” “After a while, we all got tired of pizza, so we switched to roti,” she said with her characteristic broad smile.

Also, she remained a student mentor in her free time. Coaching students, mostly those of middle vocational schools (MBO) is something that she did since she was 29, after completing her law studies at the Amsterdam VU University. Every Monday, on her off-day from Parliament, she taught a VMBO class at an Amsterdam school. Once a month, she hosts a radio programme that focuses on youth and education where parents can also call in with questions.

Youngsters have always played a central role wherever she worked, as Communication Director at a youth centre, as manager of a youth programme at the national broadcasting company NOS as programme manager and in the Second Chamber. “Youngsters are my mission.”

At the Albeda College, as Programme Manager Strategy and External Relations, she will give content to the strategy of the school board. “To get the Albeda in the mind and heart of everyone in Rotterdam. I want to help build a school where everyone feels at home.”

Jadnanansing often visits her mother in Aruba. She feels connected with the islands, but also with Suriname where her father works as a notary. Her love for the Caribbean is not what drove her to the Second Chamber. “I went into Parliament for the youngsters.”

And, even though she was not a member of the Second Chamber’s Permanent Committee for Kingdom Relations, she remained indirectly involved. “I regularly sparred with my dear colleague Roelof van Laar about the relations within the Kingdom. He does this portfolio with his heart and soul, and that is to be admired for someone who is not from the islands.”

On August 18 this year, Jadnanansing addressed the new Dutch Caribbean students in Amsterdam, an initiative which she highly praised. She told the fresh batch of students her story of how she had to get accustomed when she came to the Netherlands to study 30 years ago. She urged the students to integrate into the Dutch society by making Dutch friends and to seek help when they found themselves in trouble. Keeping up appearances doesn’t get you anywhere,” she said at that time.

Looking back at that afternoon, she said the students from the islands appeared more self-confident every year. A lot has to do with proper preparation of these students before they come to the Netherlands. “The islands need to keep investing in these youngsters, because the results speak for themselves.”

Asked about the relations within the Kingdom and the atmosphere in the Netherlands for young people from the islands, Jadnanansing said that students told her things were tougher nowadays when they compared their situation to that of the older members of their family and friends at the time that they studied in the Netherlands. “Generally, the way people speak about the Kingdom has become harsher. It is a matter of action and reaction,” said Jadnanansing.

But again for her, the focus is on the younger people. “We need to keep working on a thorough preparation of the youngsters that come to the Netherlands to study. My wish is that they get the maximum opportunity to develop themselves. I had all chances to make something of myself when I came here, and I want that for others as well.”

It was this message that she also shared with her colleagues in her farewell letter in the Second Chamber on Tuesday. “I want our youngsters to become proud professionals, valuable and self-assured. Next to these strong youngsters, we need the courage, to listen, show empathy and give feedback, also here in the Second Chamber. How can we expect the outside world to treat each other with respect when we don’t always do so?”

Jadnanansing is convinced that each person should have the opportunity to make the “best edition” of him or herself. “I will fight every day for all those youngsters who feel insecure, who didn’t find the right means to tell their story to enable them to do so. Of course they have to write their own story, but I believe they shouldn’t have to do this on their own. We as Parliament have the moral responsibility to help them in achieving this,” she told her colleagues.

“I am very grateful that I was able to write a part of my life story here, in Parliament, and I will now proudly follow my course to help all youngsters who still have to tell their story.”

Source: Daily Herald
Jadnanansing leaves Parliament to focus on her passion: the youth