Home Headlines & Top Stories James’ credentials examined, to be sworn in by Governor soon | THE... 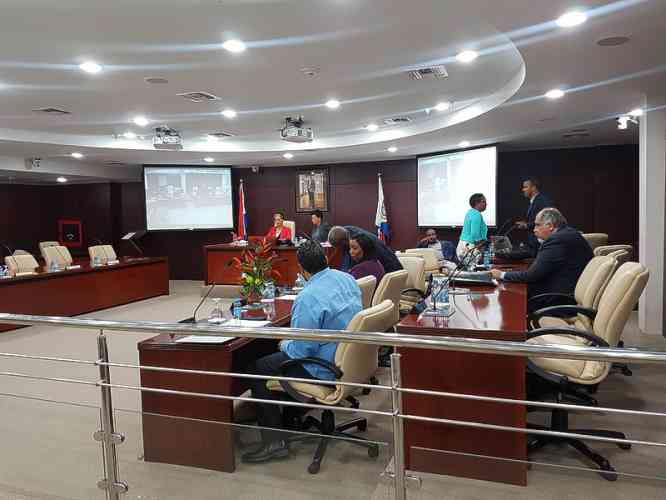 PHILIPSBURG–All is now set to bring Parliament back up to its full complement of fifteen members with the completion of the examination of substitute Member of Parliament Jules James’ credentials on Wednesday afternoon. He now has to take the oath before the governor.

Like the appointment of James to the legislature as a substitute in the place of suspended MP Theo Heyliger is a first for the young democracy, the checking of his credentials was also a departure from the norm, as it was in the third attempt to check his credentials that the parliamentary act was completed.

The first meeting called on Monday failed to get a quorum, as did the second one called on Wednesday morning. Based on the rules of order of Parliament, a third meeting was called in the afternoon and that could continue without the quorum of eight members.

That holding of that third meeting was not without objection from opposition MPs Silveria Jacobs (National Alliance) and Rolando Brison (United St. Maarten Party). They stated it was unconstitutional for any decision to be taken when less than the required “half plus one” majority was present, meaning eight MPs.

Jacobs argued that the Council of Advice has rendered its position on the Rules of Order and the non-requirement of the half-plus-one for the holding of a meeting. While that position of the Council exists, Parliament has not yet taken any decision to check its operational rules.

Parliament Chairwoman Wescot-Williams proceeded with the session and informed MPs that while the session could continue, no administrative decisions could be taken. However, the examination of James’ credentials was a “parliamentary act.” That act took the form of MPs Meyers, Leonard and Peterson reviewing the credentials and submitting their report in writing to Wescot-Williams. It is that report that will enable James to take the oath.

James cannot be prevented from taking up his seat in Parliament. However, the hurdle was that his credentials had to be reviewed by the sitting members.

Following the meeting, Jacobs and Brison told The Daily Herald they continue to be dissatisfied with the way Wescot-Williams calls only meetings that seem to favour the governing coalition and ignores or shelves those of NA and the US Party.

Wescot-Williams, in turn, said she considered the return of Parliament to its full complement was of vital importance to the running of the country.

Asked why they did not sign in for the two prior meetings, Jacobs and Brison said they had no issue with James coming into Parliament, but did not like the manner in which meetings were called. Jacobs said many times the opposition had helped the coalition to get a quorum even when Heyliger’s seat was not vacant.

James is the next highest vote-getter on the United Democrats 2018 Parliament election slate who is not yet serving in the legislature or in the Council of Ministers. He will be appointed as a “deputy” as prescribed by the Constitution.

James is to take up Heyliger’s seat that became vacant two weeks ago when Heyliger was suspended under Article 50 of the Constitution due to his pre-trial detention. He is currently in detained in Bonaire as part of the investigation into the Prosecutor’s Office’s allegations of corruption and money-laundering over a long period of time.