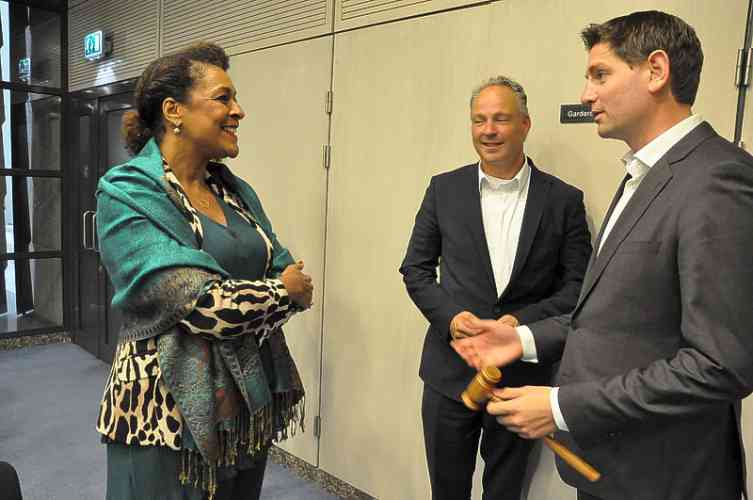 THE HAGUE–Jan Paternotte of the Democratic Party D66 is the new Chairman of the Permanent Committee for Kingdom Relations of the Second Chamber of the Dutch Parliament.

Paternotte (34), who was unanimously elected during an extraordinary procedural meeting of the Committee for Kingdom Relations on Tuesday during which he took over the gavel from Deputy Chairman Remco Dijkstra of the liberal democratic VVD party, is familiar with the Dutch Caribbean and has visited all six islands, except for St. Eustatius.

He told The Daily Herald that he had been in St. Maarten and Saba in 2011 to visit friends. His father, a sailor, lived in St. Maarten for a while. From that period, he knows a few people on the island. He and his wife are also friends with retired midwife Anne Roos. He spoke of St. Maarten as a “very special island” with its Dutch and French part. He has also been to Curaçao, Aruba and Bonaire on vacation.

Paternotte, a Member of the Second Chamber since March 2017 and a former member of the Amsterdam Municipal Council, had volunteered for the position as chairperson, which became vacant when Alexander Pechtold resigned from Parliament a few weeks ago. Under the coalition agreement of the Dutch Government, D66 delivers the chairperson of the Committee for Kingdom Relations in the Second Chamber.

Asked about succeeding Pechtold, Paternotte said he had some very large shoes to fill considering the great passion his predecessor has for the Dutch Caribbean. He said he had talked extensively with Pechtold to prepare himself for his new role.

Paternotte’s first big job will be to head the Dutch Parliamentary delegation, together with Chairman of the Permanent Committee for Kingdom Relations of the First Chamber Ruard Ganzevoort of the green left party GroenLinks, at the Inter-Parliamentary Consultation of the Kingdom IPKO which will take place in St. Maarten in January 2019.

Paternotte said he would strive for good relations between the representatives of the Parliaments in the Kingdom. He said that in the Netherlands, there was much comprehension for the difficult situation in which St. Maarten finds itself in after Hurricane Irma.

St. Maarten Minister Plenipotentiary Jorien Wuite was one of the first to personally congratulate Paternotte. She did so right after the Tuesday’s meeting. Paternotte said he very much appreciated Wuite’s good wishes and the fact that she had come to the Second Chamber to congratulate him.