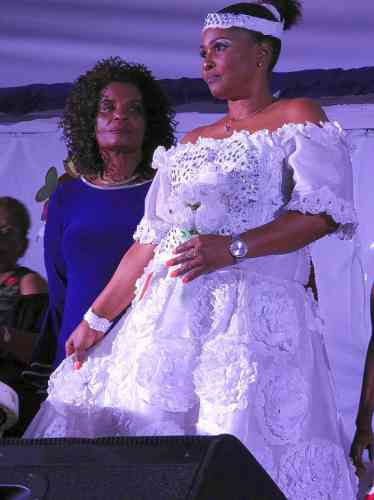 Overall winner Janine Mingau with her model in bridal wear.

PHILIPSBURG–Designer Janine Mingau is the overall winner of the third Creative Paper Apparel Competition, which was held under the Pavilion (tent) at Princess Port de Plaisance (PdP) Resort and Casino on Saturday, February 16.

Each winner will receive a cheque of US $500. More than 300 persons turned out to the show, to see the beautiful designs created by the participating designers and modelled on stage. No less than 17 creative paper apparel pieces were exhibited during the event. “The audience was wowed and you could hear them ‘ooing’ every time a different came on stage with the designer,” one of the coordinators said.

Marshall-Marlin participated in two categories and she won both categories with total points 1,332. She is the winner in most categories, while Mingau participated in all three categories. She placed in Cultural as well as Bridal wear category which gave her 1,128 points. She did not place in the top three in the Evening Wear category, but scored 565 points. This gave her a total of 1,693 points. Mingau is therefore the overall winner of the 2019 Creative Paper Apparel Competition.

The competition was themed: “What is the colour of love.” The first Creative Paper Apparel competition was held in 1991. Another was not held for many years until 2015 and 2016, and now again in 2019. The objectives of the competition were to “bring out the creativity in our people that sometimes they didn’t even know that they possess. And it is amazing to see what can be done with paper because when you are in the audience you would never know that the apparel is really made from paper,” coordinators had said.

Our Creations, St. Maarten Arts and Crafts Foundation, which coordinated the competition, said it regrets the mix up in the prizes and said it is delighted for Mingau and Marshal-Marlin on their accomplishments and congratulate both designers.