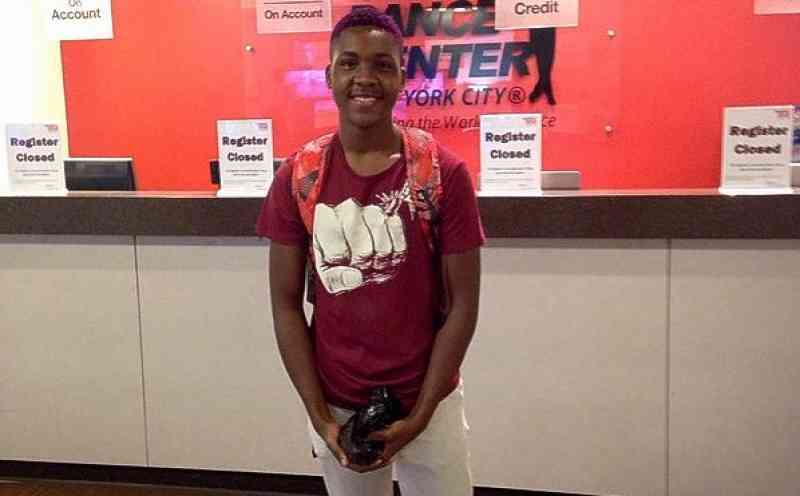 David, a student of dance since age 5 at Imbali Centre for Creative Movement and currently at National Institute of Arts, is now attending Charlotte Brookson Academy (CBA) for the Performance Arts.

David was selected in October last year to be part of a team of young artistes sponsored by Fina Dance Art School, Ecole de Danse, Turning Point Dance School and Dance Curaçao to assist St. Maarten artistes who had experienced the cataclysmic Hurricane Irma a month before. At the Dance Curaçao 2017 Festival, he so impressed his teachers, the guest teachers from Broadway Dance Center, that he was awarded a partial scholarship to attend their summer intensive.

David is a recent winner of TelCell Breakthrough in the Dance Technique Category, a scholarship recipient of the Art Saves Lives summer exchange to New York 2015, as well as recipient of the 2017 Prins Bernhard Culture Funds-sponsored tour to Curaçao and Aruba where he performed at Kosecha Cultural and Aruba Art Festival.

His accomplishments include winning a gold medal in Ballet, Outre Style and modern contemporary at the French Federation of Dance competition both regionally in Guadeloupe and St. Barths as well as internationally in France.

The Department of Culture said in a statement on Tuesday that arts education strives to promote talent development and exposure of St. Maarten youth through a variety of modes of expression. When given the right opportunity, young persons such as David are able to build capacity while learning from some of the best performers in the world. However, due to the expensive nature of attending such programmes, many young artistes are unable to attend.

“We are proud to designate this subsidy as the ‘Neville York Talent Scholarship,’ as the late York was a strong proponent of talent development, particularly for the young people of St. Maarten. We aim to support young creatives like Jeremiah David and maximise potential locally as well as abroad,” stated the department press release.

The Department of Culture congratulated David, his family, his teachers at National Institute of Arts and CBA, and all his mentors on his artistic achievement. Indeed, it takes a village to nurture and support the children in the community. The Department commends the additional support David received from sponsors.