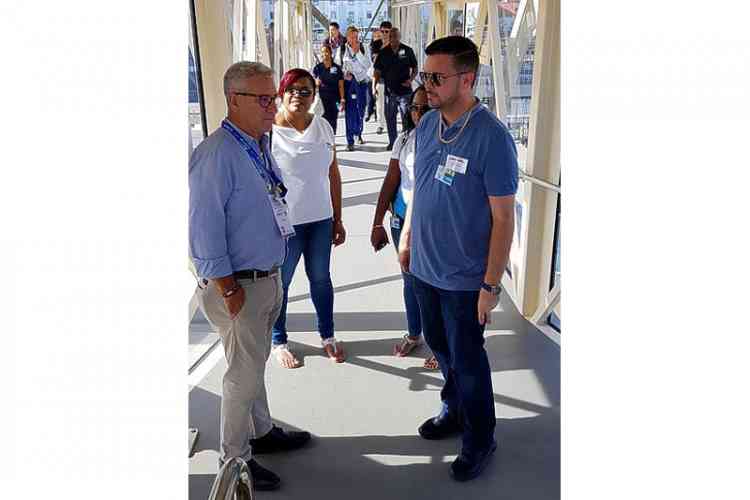 The entire trip cost 8,300 euros, according to a press release.

Port St. Maarten will also be in attendance as they try to drum up a new business and speak of the improvements they made since 2017.

The overall effort is in keeping with TEATT’s bid to boost cruise ship visitor interest in St. Maarten, TEATT said in a press release.

Seatrade Europe is organised by Hamburg Messe and Congress GmbH, in collaboration with Seatrade (Informa Markets) and will be held in Germany from September 11-13.

“Learning best practices from the Port of Hamburg, which is the leading centre for cruise shipping in the world, has a huge value. Last year they welcomed more than 2.19 million cruise passengers to their shores and recorded 11 per cent passenger increase and eight per cent increased cruise calls,” said Johnson on Monday.

He said the work on St. Maarten continues as both French and Dutch-side tourist offices and government officials work to let the world know “St. Maarten is open for business.

“Especially after being devastated by hurricanes, this message is an important one which the world wants to know. On Sunday, Rick Fox, a Canadian-Bahamian retired NBA [National Basketball Association – Ed.] star, actor, businessman and sports franchise owner spoke on CNN [Cable News Network] letting the world know that the Bahamas depend on their visits and encouraging them to visit,” said Johnson.

The Bahamas is presently going through the first few days in the aftermath of the worst storm to hit the Bahamas, which has displaced more than 70,000 people and left many dead.

“This is the message that St. Maarten must not stop spreading to the world because we depend on visitor arrivals,” Johnson said.

“The port continues to work with our cruise partners throughout the year and we are looking forward to attend this leading trade event. Seatrade Europe is an opportunity to have discussions with cruise line executives by reconnecting with them and networking with European cruise lines,” Port St. Maarten said on Thursday.

Johnson is scheduled to be the guest of honour at the Monaco Boat Show, which will be followed by a roundtable press conference featuring dozens of international media houses.

He also has a scheduled visit to the Port of Rotterdam as part of efforts to garner new information and innovations in cruise travel.

As part of his official responsibilities, Johnson is scheduled to visit the Netherlands Tourist Board on September 16. He will also likely attend the opening of the Dutch House of Parliament, after a visit to St. Maarten House in The Hague.

St. Maarten’s economic development is an issue Johnson wants to tackle on his trip, according to a press release.