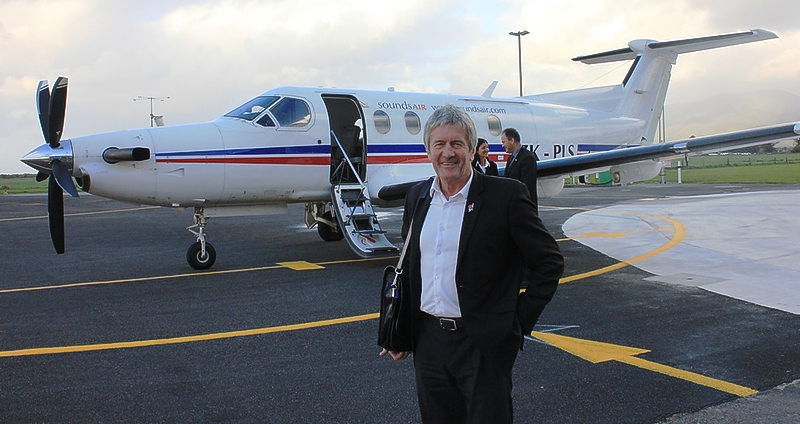 AIRPORT–Andrew Crawford, Chief Executive Officer (CEO) of Sounds Air, an airline in New Zealand, almost on the opposite side of the globe, will make a presentation at the Caribbean Aviation Meetup in St. Maarten June 13-15.

It takes record-breaking numbers for him to come to the event in the Caribbean, flying from Blenheim where his company is headquartered to Auckland, New Zealand, then across the Pacific to Los Angeles and on to Miami for the final leg to St. Maarten. All in all, it is a 33-hour trip with 24 hours in the air and crossing 10 time zones.

“The Caribbean conference seems to be the ideal platform to connect with a lot of like-minded people. I have spoken at several conferences in Australia, and always had a good reception. We are passionate about aviation, especially in the general aviation and small airline sector and feel the experience we have gained in 30 years of operation is something that would be good to share,” said Crawford, who is looking forward to coming to St. Maarten.

“What excites me about joining at this particular conference in the Caribbean is that it’s catering for a niche market in our area of expertise. Hopefully we can impart some knowledge and learn a lot ourselves.”

Under his leadership, Sounds Air provided its airline services to more than 100,000 passengers last year with its fleet of 10 small aircraft. The operation has come a long way. Its original founders had a vision of providing low-cost inter-island transport to provide locals and tourists with easy access to the Marlborough Sounds, an extensive network of sea-drowned valleys at the North end of the South Island of New Zealand.

In 2003, the operation had only one single 12-seater Cessna Caravan flying one route, moving 14,000 people who were opting out of the 3½-hour drudgery of the sea ferry between the North and South Islands of the country for the much faster scenic flight across Cook Strait.

“I am always excited to see a new part of the aviation world. The Caribbean has a great history and tradition and I am excited to see what it offers. I was recently in Hawaii and took a great interest in the smaller airlines there. They are operating large Cessna Caravan fleets in high frequency operations like ours; it’s great to see them being so successful. I am passionate about single-engine turbine operations.

“We have been operating the Cessna Caravan for 30 years. They are a fantastic aircraft for our operation – extremely high on-time dispatch rate for reasonable cost makes them the perfect aircraft for most of our sectors. We have five of them in our fleet along with five Pilatus PC12s,” said Crawford.

These single-engine turbine-powered aircraft are perfect for Sounds Air routes and providing high levels of passenger safety and comfort, as well as being very sturdy and extremely reliable aircraft to operate. The Caravans that Sounds Air is using are also perfect planes for shifting freight. The airline is being approached by an increasing number of companies that want to shift perishables, lobsters and fresh blood for hospitals around the country.

“Some of the experiences I want to share are, of course, the 30 years of operation in the single engine, single pilot environment. What may be of special interest are the benefits of the airline enterprise software system we use and how it clearly shows how it has transformed our business.

“From reservations to online booking to flight management to maintenance scheduling and tracking to flight and duty to revenue management to GDS interface, it has transformed our business. These are the types of experience I want to share,” said Crawford.

In the past, Sounds Air could not find an appropriate contractor suitable to maintain its aircraft when it wanted them maintained. Being annoyed by the delays that contractors were taking with its growing fleet, Sounds Air decided to do it itself and created an additional company, Sounds Aero Maintenance.

Similar to the smaller air transportation operations in the Caribbean, Sounds Air pilots are highly trained and more flexible in their landings than other providers, tailoring their approaches to suit the conditions. If it is a really windy Northerly in Wellington, they come in slowly and high and then get down to the ground more quickly, instead of barrelling in at a certain speed, or a certain time they put the flaps down.

“There are similarities between our operation and activities in New Zealand and operations in the Caribbean. We operate between two islands, single engine, over water. Sounds just like a Caribbean,” said Crawford.

He is proud of what his company has achieved, but likes to deflect attention by saying people are only interested in aviation because of its sex appeal. From an airline that started as a tourism venture getting people in and out of the Marlborough Sounds, the company has successfully carved itself a niche in New Zealand aviation.