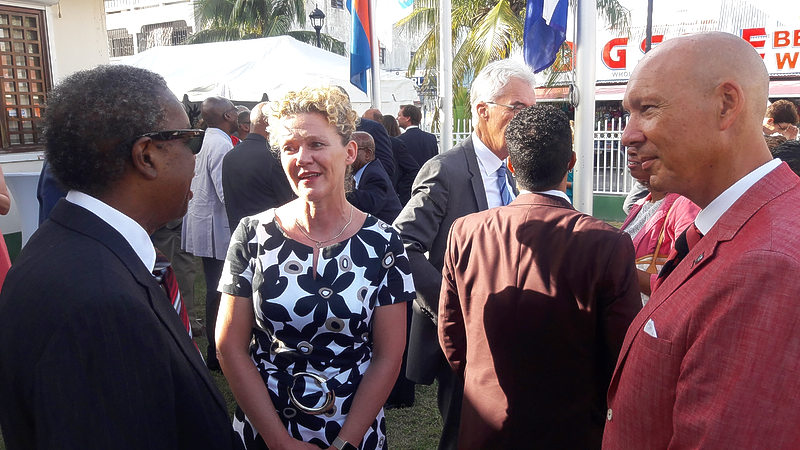 PHILIPSBURG–New Judge in civil, administrative and civil servant cases for St. Maarten, Saba and St. Eustatius Paula van der Burgt (52) was officially installed as a member of the Joint Court of Justice of Aruba, Curaçao, St. Maarten, and of Bonaire, Statia and Saba during an extraordinary sitting of the Joint Court at the Courthouse in Philipsburg on Friday.

Judge Van der Burgt was sworn in by Governor Eugene Holiday as a member of the Joint Court of Justice on August 1. She has been a Judge since 2003.
Joint Court of Justice President Eunice Saleh gave an outline of the new judge’s work history in her address to dignitaries. Van der Burgt was born in 1964 in ‘s-Hertogenbosch. She studied law at the Catholic University of Nijmegen.

She has gained extensive experience in civil law, civil and family law and administrative law and will also work on island. “We are pleased that she has taken this step and she has a link with the Caribbean already. I understood that Van der Burgt and her husband had known each other 25 years ago in Curaçao,” said Saleh.

She said those who worked with Van der Burgt describe her as a very intelligent, excited colleague, who has humour, is civilized, social, and knows how to deal with people.
The Joint Court President also introduced Peter Lemaire who succeeded Judge Mans as Vice President of the Court with effect from August 14, for St. Maarten. Lemaire is a former vice president of Aruba joint court, and is not unknown on St. Maarten. He has done criminal court cases in the past.

Language of Instruction
President Saleh said she was interested in the news that government intends to step up the introduction of English as the first official language on the island.
In 2015 and 2016, two motions were adopted by the Parliament of St. Maarten to that effect. Minister of Finance Richard Gibson Sr. announced last week that space would be made in the budget to start this process. One of the first steps is to present legislative proposals to Parliament in English, rather than in Dutch.

Furthermore, Minister of Finance Gibson Sr. is a champion of the English Law School that should start this month or September on St. Maarten, according to the judge. “This was the inspiration for my speech. It is not about whether it is desirable to introduce legislation in English, but about justice and the main language in St. Maarten.

“Language is the identity of people and jurisprudence is largely language and is about people. At the risk of boring you, a piece of history, partly derived from an article by Professor Jan Reintjes in TAR Justitia: The legal language in Antillean criminal cases.
“Originally there was no discussion about the subject of the rule of law. As long as one understood each other, it was good. But in the 19th century a Dutch monopoly was claimed in the courtroom. That was a problem in the Antilles. Procedures in that language were complicated due to lack of knowledge of Dutch,” stated Saleh.

She continued, “The then Council of Justice on St. Maarten decided to hand in the hearing of judgments and judgments in English. This happened on 17 June, 1869, during the first session of the Council. The court had to decide in each procedure whether English or Dutch would be used. As a consequence, English became the language of the court in the Windward Islands.

“The current regulations: The National Court of Justice (Article 9) stipulates that the courts and courts in first instance are English, Dutch and Papiamentu. The Staatsregeling van Sint Maarten (2010, AB 2010, GT no. 1, Article 1, paragraph 2), states that the official languages in St. Maarten are English and Dutch,” added the judge.

The Court will follow developments closely and keep as much connection as possible. Where necessary and desirable, the Court is obviously willing to think about promoting English as a government language and a straightforward language.
Ultimately, the Courthouse is for the benefit of St. Maarten’s society, where almost everyone is a native English speaker. “It is the conviction of the Court that further jurisdiction of the Court of Justice and the case law is of importance.

“In addition, there is a remark that there must be a good balance, with assistance from judges from the Netherlands desirable. This prevents distortion and introduces new expertise in each case. Advertisements are regularly placed in the media for training. To the experienced lawyers of our countries who want to meet this challenge, a call to apply or to contact for an orientation conversation is possible,” said Saleh.